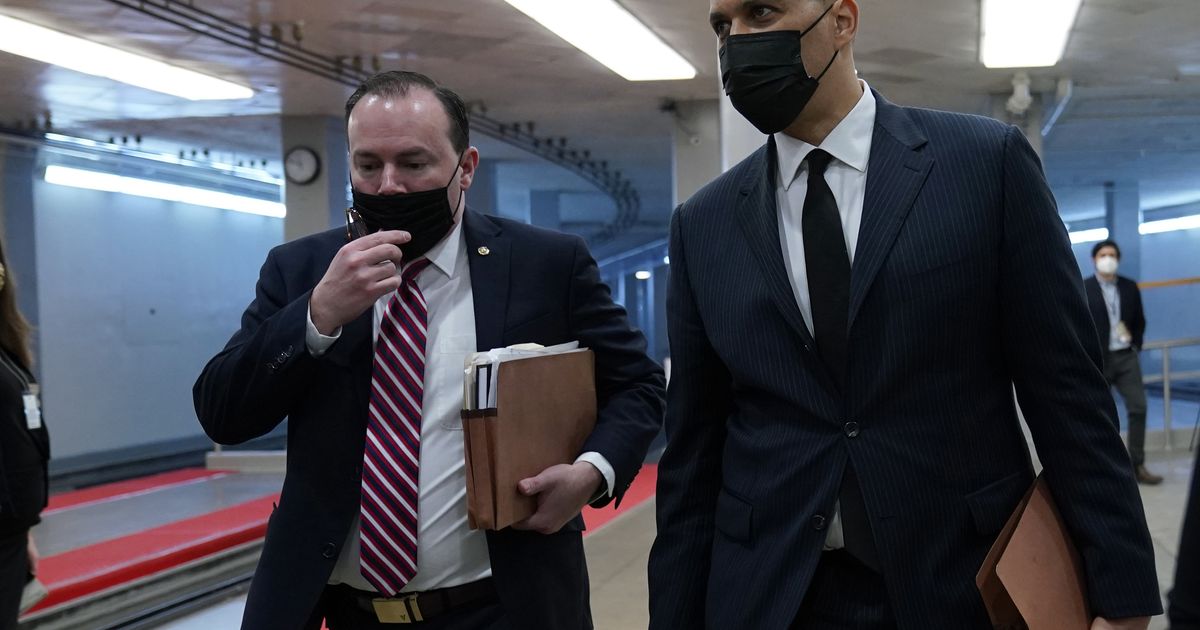 Utah Sen. Mike Lee took an unusual step Thursday for a senator essentially acting a juror in the second impeachment trial of former President Donald Trump: he met with Trump’s legal team before it presents its case on Friday.

“Yes, it’s true,” a spokesman for Lee confirmed. “He met with them because they invited him. He’d happily talk to the House managers, too.”

NBC News reported that Cruz said they were “discussing their legal strategy and sharing our thoughts.”
“That’s very unusual,” Sen. Ben Cardin, D-Md., told CNN about that meeting. ”We took a separate oath to be jurors and to weigh the information that is presented. … It seems a little strange to have separate meetings with the counsel” for Trump.
The Washington Post reported that after their meeting, Trump attorney David Schoen told reporters the senators were just “talking about procedure,” called them “friendly guys” and said they did not tip him off to questions they would be asking.”

They discussed “just how this format goes, you know, the question-and-answer period, all that,” Schoen said. “And then just talking about where they’re from and all that, but it’s just very nice. I said to them it was a great honor to have the opportunity to talk to them.”

Graham was spotted leaving the meeting and told reporters, “See you tomorrow.”

During the impeachment trial, senators are expected to be impartial jurors, listening to the evidence from both sides before voting on whether to convict.

However, in Trump’s first impeachment, then-Senate Majority Leader Mitch McConnell set a precedent of conferring with the defense.

Also, Lee has already been outspoken in predicting that Trump will be acquitted, and also called the articles of impeachment “irresponsible.”

Another Utah facet to the impeachment trial occurred Thursday when Democrats prosecuting the second impeachment of Donald Trump used a video clip of Republican Utah Gov. Spencer Cox on Thursday to help make their case that even key Republicans say the former president must be held accountable.

“People have to be held accountable, and yes, that includes the president,” Cox said in a clip shown to the Senate.

It came from a Jan. 11 interview that Cox gave on “Good Morning America,” and only a small part of it was shown.

In other parts of that interview, Cox said then about Trump, “I certainly think it would be good for the nation if he were willing to resign. I doubt that’s going to happen.”

When Cox was asked in that interview if he would vote to impeach Trump, he said, “Well, I would have to look at all of the evidence, but I would very much consider it. I can tell you that right now. But I don’t have a vote.”

It was the second day in a row that a Utahn had a key video cameo at the impeachment. On Wednesday, Sen. Mitt Romney had a short but harrowing cameo showing he had a near-miss in running into the mob on Jan. 6.

“In this security footage, you can see [Capitol Police] Officer [Eugene] Goodman running to respond to the initial breach,” she says. “Officer Goodman passes Sen. Mitt Romney, and directs him to turn around in order to get to safety.”

Romney is shown turning and then running to escape the mob.

Of course, Romney is one of the most recognizable members of Congress as the 2012 GOP nominee for president — and is someone the mob probably despised as the sole Republican who voted to convict Trump in his first impeachment. Had the mob found him, it could have been a disaster for Romney.

Romney later said, “I am deeply grateful to Officer Eugene Goodman for his bravery, and I am thankful for all of the officers and agents whose heroic actions prevented a tragic situation from becoming even more horrific.”

Utah was also mentioned during a discussion Thursday about continuing online threats from Trump supporters — even after the Jan. 6 riots — led states to increase security around their capitols before the Jan. 20 inauguration of President Joe Biden.

House impeachment manager Diana DeGette, D-Colo., mentioned that Utah spent $585,000 on mobilizing National Guard troop and Highway Patrol troopers for such efforts, and that was included in a chart shown to senators about how much was spent by six states.