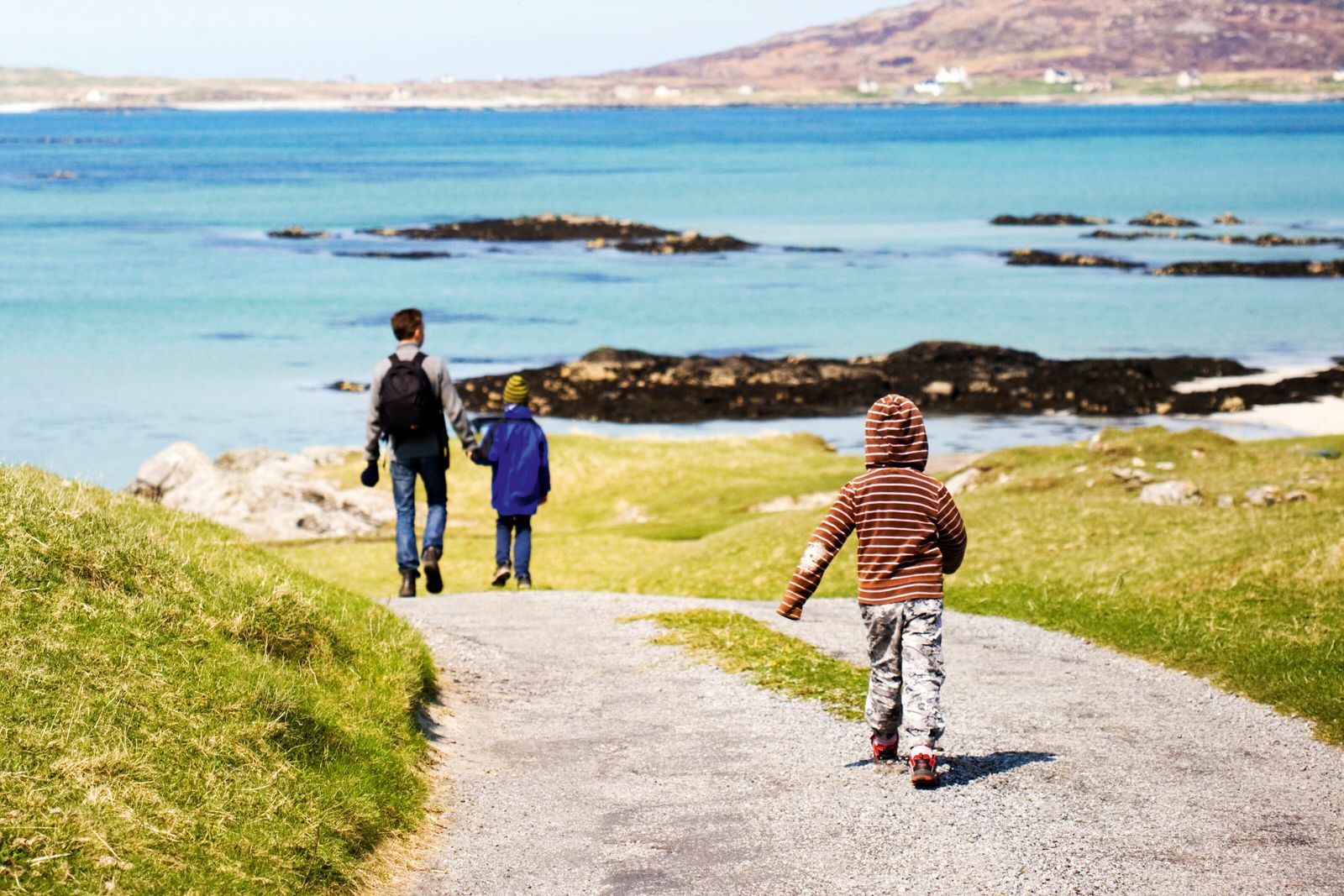 The inky waters that pound Donegal’s coast have shaped the region’s distinctive sea stacks over thousands of years, and you can conquer the dramatic formations for yourself on a trip with Unique Ascent. Led by climber and mountain instructor Iain Miller, steely seafarers will be guided to the summit of one of these rugged, rocky outcrops after kayaking from the coast; keep your eyes peeled for seals and basking sharks. The team welcomes kids, too, having climbed with children as young as five.

Alternative: Scaling the cliffs on the Isle of Portland, Dorset — suitable for climber of all abilities.

The result of a collaboration between the Turner Contemporary art gallery and Visit Kent, England’s Creative Coast has finally landed after a Covid-induced delay. Tying together 870 miles of coastline across Essex, Kent and Sussex, the programme incorporates seven new site-specific artworks by seven international artists. Adding an element of discovery for kids, there’s an associated GeoTour, where participants set out on a treasure-hunting-type mission to find hidden ‘caches’ at sites marked on the Creative Coast app.

Alternative: Try geocaching along the South West Coast Path, with trails in both North and South Devon.

For swashbuckling adventures, head to Lewis and Harris for white sands and seas as clear as the Caribbean. As for where to stay, the Wildlife Trust-affiliated Big Wild camp-out is taking place on 19 June. This initiative aims to encourage more of us to sleep out beneath the stars. This year, the focus is on camping in your back garden, but the good thing about Scotland is that wild camping is legal, and you can pitch a tent almost anywhere. Just remember to pack the hot chocolate for when darkness falls.

Alternative: There’s very little scope to go wild camping legally in England and Wales. Head instead to a beachside campsite, such as Beryl’s Campsite, a secluded spot in Kingsbridge, Devon, where winding paths lead to Start Bay in Salcombe.

If you have little ones to entertain, the sweeping sands of Formby, on Merseyside, are perfect for bucket-and-spade family escapes. Given this beauty spot falls under the care of the National Trust, it’s a very natural beach experience on offer here. Instead of souvenir shops, expect climbing and sliding down milky-white dunes and games of hide and seek in the marram grass. You might even spot red squirrels scuttling through the woods that unfold beyond the sands.

This lively seaside resort on the southern tip of North Wales’ Llŷn Peninsula draws the crowds with its thriving water sports scene, which has salty-haired surfers and families alike revelling in its balmy climate. If you’re visiting in high summer, grab a board and cool off with a surf at the wild beach of Porth Neigwl (Hell’s Mouth) — a vast stretch of coastline with churning waves that are perfect for surfers and kayakers. If the pounding waves put you off, try a spot of body boarding in the shallows.

Alternative: Look to Saltburn, in Yorkshire, dubbed the ‘surf capital of the North’, where wave-seekers round off a day on the water with fish and chips.

A short hop across the Irish Sea, this bucolic island has quietly established itself as a hub of outdoorsy action. That’s in no small part due to its rugged coastline, marked with hidden coves, caves and towering cliffs where seabirds come to nest. To capture the entire scene from the water, try standup paddleboarding (SUP) along the shoreline. Saltworks SUP offers a range of sessions for adults and children aged 11 and over. It even provides SUP Glo paddles after nightfall and SUP safaris, allowing you to glide close to seals in the flinty swells.

Alternative: For a more strenuous workout, try surf SUP on the waves at Polzeath in Cornwall. If you’re lucky, you might even spot a dolphin breezing past.

The unspoilt beaches and rugged coastline of England’s North East rarely see the same heaving crowds as the South West, yet the scenery is just as beautiful. For action-packed thrills, try coasteering — a blend of cliff jumping, rock climbing and cave exploration — with local outfit Adventure Northumberland. Suitable for anyone over the age of eight, each two-hour stint will have you staggering over rocks and throwing yourself into the foamy swells. The team also runs more sedate kayaking trips around Coquet Island, an RSPB seabird sanctuary a mile from the mainland.

Alternative: Head to St David’s in Pembrokeshire, where coasteering was invented in 1986.