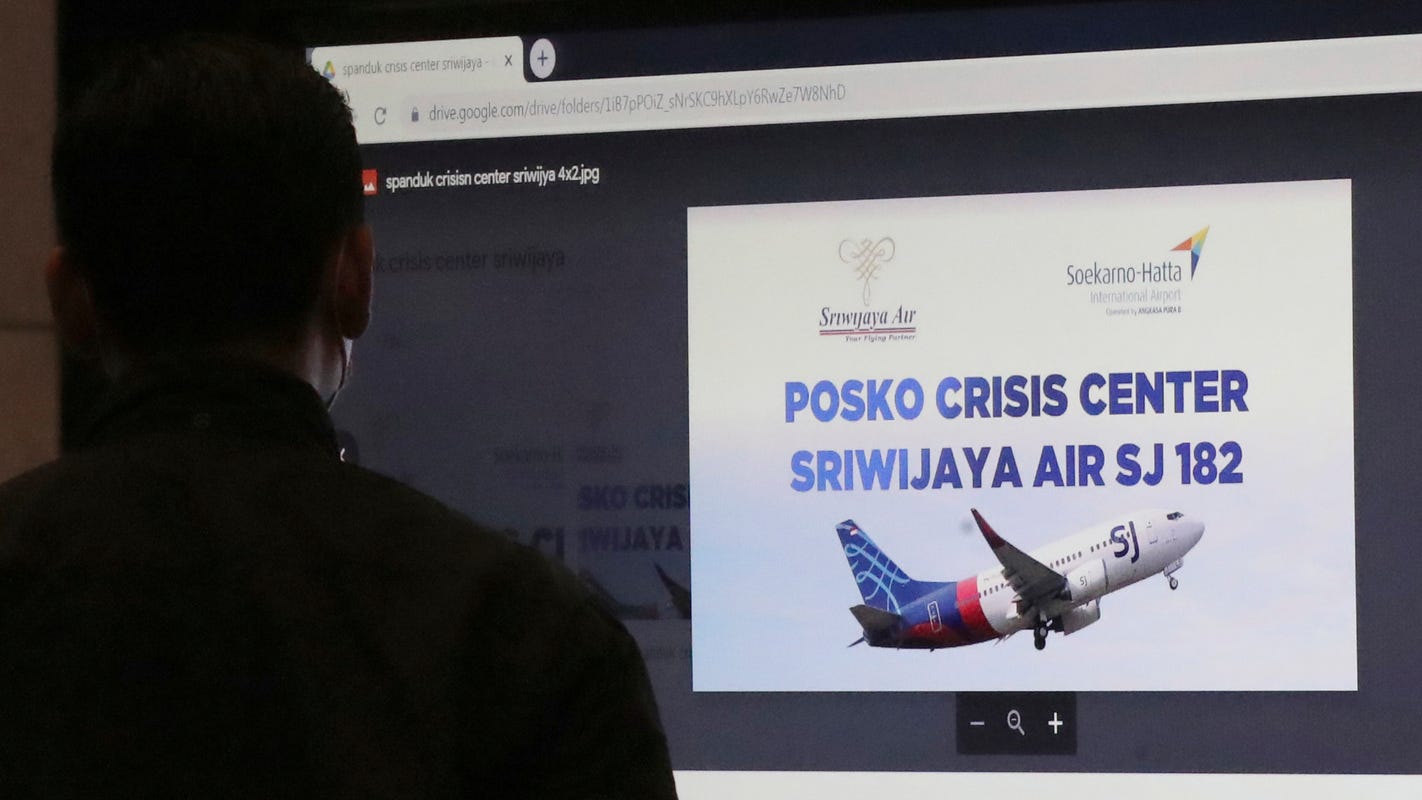 It lost more than 10,000 feet in altitude in one minute, four minutes after departure, according to the flight tracking service.

A Boeing jet carrying 62 people lost contact with air traffic controllers Saturday in Indonesia after rapidly losing altitude, with debris believed to be from the plane spotted in the Java Sea.

Sriwijaya Air flight 182, operated with a Boeing 737-500, took off from Jakarta at about 1:56 p.m. local time and lost contact with the control tower at 2:40 p.m., said Indonesian Transportation Ministry spokesperson Adita Irawati.

The incident comes a day after the one-year anniversary of the shooting down of a Ukraine International Airlines flight in Iran with 176 people aboard, one of two major airline crashes in 2020. And it comes just over two years after a Boeing 737 Max crashed in Indonesia, killing 189.

Ask the Captain: Why do seat backs need to be upright and tray tables stowed during takeoff and landing?

Here’s what we know:

What is Sriwijaya Air?

Sriwijaya Air, based in Jakarta, Indonesia, started flying in 2003 and typically carries nearly 1 million passengers a month, according to the airline’s website. It is a discount carrier with low fares and fees, a la Spirit, Allegiant and Frontier in the United States.

The airline mostly flies routes within Indonesia but has limited international service to Malaysia and China, according to the aviation data firm Cirium. Saturday’s flight from Jakarta was bound for the island of Borneo, which is about an hour away by air.

The airline is the fifth largest airline in Indonesia based on flights, accounting for 10% of Indonesia flights last year, according to Cirium. Lion Air is Indonesia’s biggest carrier.

Sriwijaya Air is scheduled to fly 4,300 flights this month, compared with 26,000 flights for Lion Air, Cirium says. In comparison, Southwest Airlines, the largest domestic carrier in the U.S., has 62,000 flights scheduled in January.

American Airlines flew a Boeing 737 Max with paying passengers from Miami to New York on Tuesday, the plane’s first commercial flight in U.S. skies since it was grounded after two deadly crashes. (Dec. 29)

It was part of the airplane manufacturer’s 737 “classic” lineup, which ended production in December 1999, according to Boeing.

The plane involved in the incident was delivered to Sriwijaya in 2012, according to PlaneSpotters.net.

The plane was 26 years old and was previously in the fleet of Continental Airlines and, later, merger partner United Airlines, according to the website.

Boeing has had a bruising couple of years following two crashes of the Boeing 737 Max, which killed 376 people. The plane was grounded by the Federal Aviation Administration and other aviation regulatory authorities in March 2019 and only recently certified to fly again.

This week, Boeing settled criminal charges brought by the U.S. Department of Justice for defrauding the FAA.

“Boeing’s employees chose the path of profit over candor by concealing material information from the FAA concerning the operation of its 737 Max airplane and engaging in an effort to cover up their deception,” the DOJ said.

Boeing will pay more than $2.5 billion, including a penalty of $243.6 million, compensation payments to 737 Max airline customers of $1.77 billion and a $500 million fund for the victim’s beneficiaries.

The plane in the Sriwijaya crash does not have the software that was at the center of the Max crashes. Boeing added software to the plane’s flight computer that would work in the background so the Max would feel to pilots like previous versions of the 737. It was called the Maneuvering Characteristics Augmentation System, or MCAS, and it proved to have serious flaws. In both the crashes, pilots wrestled to keep their aircraft aloft as MCAS repeatedly pushed the nose down. They were unable to disengage the system, which eventually sent them into dives from which they could not recover.

The plane was 26 years old. Isn’t that ancient?

Anthony Brickhouse, an aviation accident investigator and associate professor of aerospace safety at Embry-Riddle Aeronautical University in Daytona Beach, Florida, said the first thing he wondered when he heard about the missing jet was whether it was a 737 Max.

With that factor out of the equation, he said investigators will focus on three broad areas as they try to figure out what happened to Sriwijaya Flight 182: the human element, the plane and the environment on the day of the flight, most notably weather.

He said travelers in the United States consider a 26-year-old plane old because airlines are constantly refreshing their fleets. Florida-based Spirit Airlines, for example, constantly brags that its average aircraft age is 5.6 years.

But a plane’s age is not the best measure of its life span, the number of takeoffs and landings and flight hours are more important, Brickhouse said.

“The age of the plane doesn’t necessarily tell us a lot,” Brickhouse said. “It’s a lot deeper than that.”

Another factor that will be under consideration in this case: Indonesia’s relatively poor record on aviation safety.

“Over the past 15 years or so they’ve definitely had some major safety challenges with different airlines,” Brickhouse said.