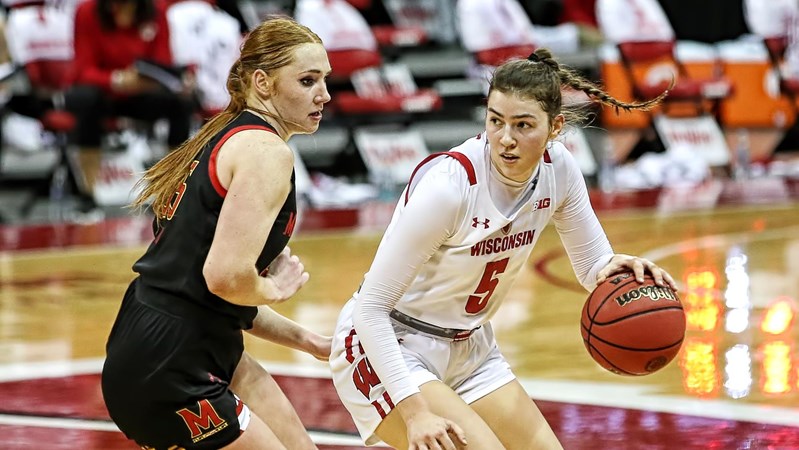 The Badgers continue their East Coast road trip on Sunday, taking on Penn State (6-7, 3-6). Wisconsin and the Nittany Lions tip off at 1 p.m. CT from Bryce Jordan Arena, and the game will be streamed on B1G Network+.

Here are five things to know before the game:

1. LEADING LIKE LEWIS: On the day that she was presented with a commemorative ball recognizing her 1,000 career points, junior Imani Lewis went off in against Illinois, scoring a season-high 22 points, just one off her career high, and pulling down 16 rebounds, tying her career best. Lewis has eight double-doubles this season, including the last five games in a row, which ties for the  Big Ten lead. The 6-foot-1 forward is averaging team bests of 18.2 ppg and 13.4 rpg over the stretch, shooting 45.8% (33-72) from the field and 75.8% (25-33) from the free-throw line.

2. DEFENSIVE DOMINANCE: It took a total team effort but Wisconsin finally won its first Big Ten game with a 69-57 win over Illinois on Sunday afternoon in the Kohl Center. The Badgers played one of their best defensive games of the season, holding Illinois to an opponent season-low 28.8% (19-66) from the field, while UW shot 40.3% (27-67). UW also outrebounded the Illini 50-40, UW’s highest single-game rebounding total since the first game of the season., Wisconsin looks to build on its defensive momentum and continue to play well-communicated, team defense as it did against the Illini.

3. LAST TIME OUT: Wisconsin faced off against the Terrapins on Jan. 17 in Madison and while a strong outing fell just short, many positives came out of the loss that the Badgers will look to improve on during the rematch. Wisconsin saw big games from Sydney Hilliard, Julie Pospisilova and Lewis last time out against Maryland, all putting up double digits as the game served as being the first of Lewis’ double-double streak. Shooting the ball well from deep at a .333 (6-18) 3-point clip, the Badgers also shot well from the free-throw line at a season high .923 (12-13) percentage. Continuing to shoot the ball well and maintain defensive momentum will be important in outwitting a high-powered Maryland offense.

4. SCOUTING MARYLAND: Leading the way offensively for the Terrapins is guard Ashley Owusa, but it was forward Chloe Bibby who had her way against the Badgers in their last meeting, scoring 19 points. Forward Mimi Collins also took advantage of the Badger rebounding core, grabbing 17 boards in the seven-point loss on Jan. 17. On the defensive side of the ball for Wisconsin, limiting 3-point opportunities will be important as the Terrapins lead the Big Ten in 3-point field goals made and 3-point field goal percentage.

5. HOW TO WATCH: Tip-off is scheduled on Thursday for 3 p.m. CT at the XFINITY Center in College Park and fans can find the matchup on Big Ten Network or listen to the voice of the Badgers Jon Arias call the game on U-100.9 FM. See live updates and stats by following @BadgerWBB on Twitter.