The Sun Belt Conference basketball season is set to open Friday with a scheduling format aimed at ensuring safety in an unprecedented coronavirus season.

This season, both ASU and UALR men’s and women’s basketball programs will face only divisional foes. They also will play the same team on Fridays and Saturdays, sometimes less than 24 hours apart.

While coaches and players understand the emphasis on safety, questions remain about how the tightly packed schedule will affect competitive balance.

“[The plan) is something that is a good thing as far as covid-19 goes,” University of Arkansas at Little Rock women’s Coach Joe Foley said. “As far as the conference and basketball, it’s not the best by any means.”

The Arkansas State University men’s team begins with two games at Louisiana-Monroe. The ASU women were set to start at home, but covid-19 issues in the Louisiana-Monroe program forced those two games to be postponed.

The divided conference will reconvene in Pensacola, Fla., for the Sun Belt Tournament during the first week of March.

“I think every conference is trying to figure this season out the best way they can,” Sun Belt Conference Commissioner Keith Gill said. “For us, this was what we thought would work best in terms of minimizing travel, minimizing changes and exposure opportunities in moving teams around the country and trying to complete a season.”

Reduced travel, fewer games and longer gaps between contests — along with the conference’s testing guidelines — were part of the recommendations made by the Sun Belt’s covid-19 advisory panel, which was made up of medical professionals from the conference’s member institutions.

The format also gives the conference flexibility in regard to postponements. The Sun Belt is eyeing midweek slots to schedule make-up dates.

“You can’t bend covid-19 to basketball,” Gill said. “You have to bend basketball to covid-19.”

But covid-19 is not the only concern for coaches and players.

The UALR women’s team will play Friday at 1 p.m.; 27 hours later, the Trojans will tip off at Texas-Arlington once again. Every program in the conference will maintain a similar schedule over the next two months.

The format leaves players, who in normal Sun Belt seasons play Thursday and Saturday, a short window for recovery. Programs with deeper benches will benefit more than usual from the ability to spread minutes and rest key players.

The season will lend itself to coaches who can make adjustments on the fly. ASU men’s Coach Mike Balado compared the preparation required this winter to the work a football team puts in, preparing all week for one opponent.

“It’s different, but we’re embracing it and we’re just happy to be playing basketball,” Balado said. “With everything this year, if it were normal it’d be boring.”

A coach can’t do much between Friday and Saturday other than review game video and hope his players get a good meal and some sleep, UALR men’s Coach Darrell Walker said. Foley and Balado both feel that this season will be more about preparing their own teams than planning for opponents.

Walker is not too keen on facing only five different teams over the next two months.

“Why am I playing one team four times?” Walker asked. “And if we’re lucky enough to make it to the tournament in Florida, we haven’t played any of the other teams on the other side. It’s not good, as far as I’m concerned, but it is what it is.”

Any scheduling blowback hasn’t reached conference headquarters in New Orleans, Gill said Wednesday. He reiterated safety as the primary concern in the Sun Belt’s planning, and he credited schools for their adherence to covid-19 guidelines and willingness to adjust to the ever-changing landscape.

The rigors will begin to show themselves once conference play begins, and the Sun Belt’s experiment starts Friday. 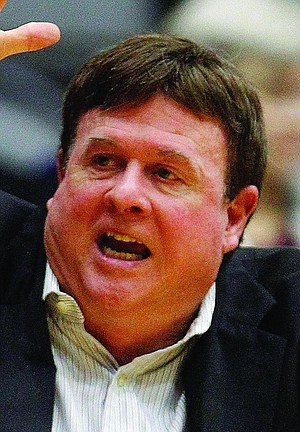 UALR head coach Joe Foley talks to his players during the fourth quarter of the Trojans’ 58-46 win on Thursday, Jan. 9, 2020, at the Jack Stephens Center in Little Rock.
(Arkansas Democrat-Gazette/Thomas Metthe)