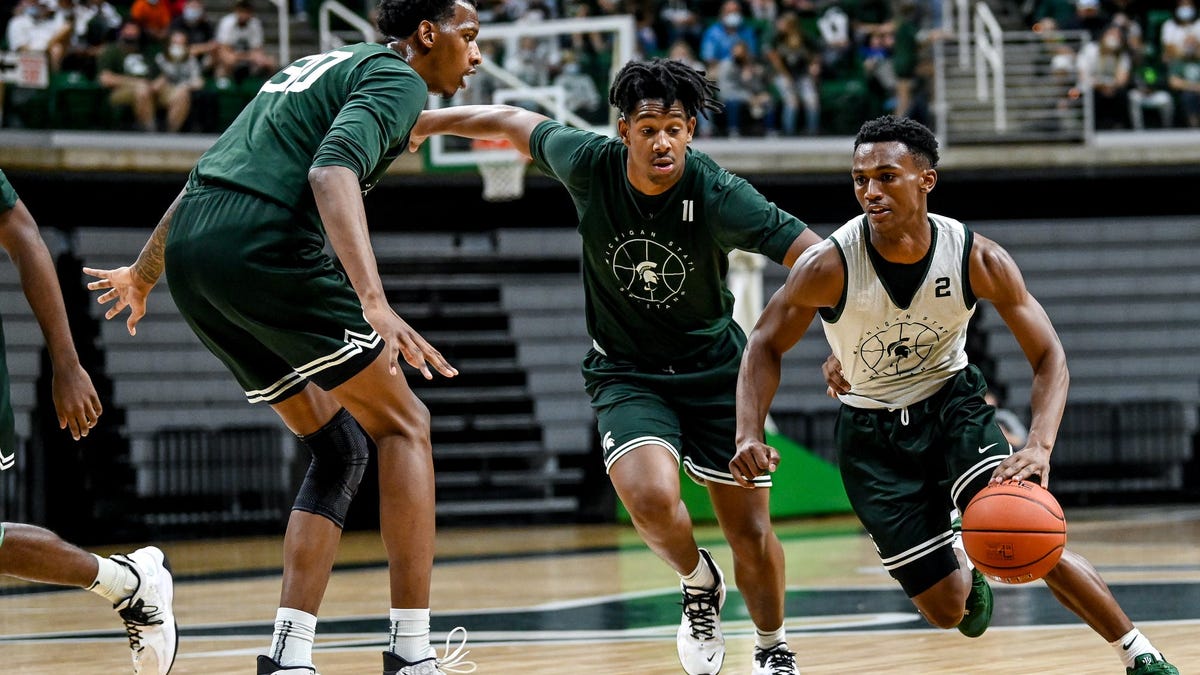 EAST LANSING — Tom Izzo quickly quipped that his point guard battle between A.J. Hoggard and Tyson Walker was a “quarterback controversy.” Even jokingly compared them to Oklahoma football’s Spencer Rattler and Caleb Williams.

In reality, one of the biggest salesmen for Walker to transfer from Northeastern to Michigan State basketball during the offseason happened to be his chief competitor for minutes: Hoggard.

“I just told him it’s a real family,” Hoggard, a sophomore, said after practice Wednesday. “A lot of schools preach it, I’ve been through it. &mldr; It’s truly a family, truly a brotherhood here. I just told him if he comes here, he’s gonna be locked in from Day 1, and everybody’s gonna show him love.”

And after a 2020-21 season in which Izzo blamed himself for persistent problems at point guard that almost led to his NCAA tournament streak ending, the Spartans feel Hoggard and Walker present advantages running the offense as they battle for the starting job.

“They’re both like New York City cab drivers,” Izzo said Wednesday. “They get along well together, they both work very hard. They’re a little different — one shoots it better than the other, one’s bigger and stronger; one defends on the ball a little bit better, one rebounds a little better. So I think it’s gonna be a good combination. And if we run like I want to run, we’re gonna have to put more guys in.”

MSU, which went 15-13 while being eliminated in the NCAA tournament’s First Four by UCLA, struggled to find an answer at point guard. Foster Loyer opened as the starter, followed by Rocket Watts took over, but both struggled for various reasons and left the program. Loyer transferred to Davidson and Watts to Mississippi State.

The 6-foot-4, 210-pound Hoggard, who underwent a knee procedure before last season, worked his way into starting eight of his 26 games, averaging 2.5 points, 1.9 rebounds and 2.0 assists in 13.4 minutes as a freshman. He shot 30.7% overall, including 3-for-18 on 3-pointers, but he used his size and ability to get into traffic off the dribble and get others involved.

After dropping 20 pounds during the offseason, Hoggard said he feels he went from “a little sluggish” in summer 2020 to “a lot better” coming into his second season.

“I feel I can go longer,” Hoggard said. “I feel a lot stronger. I feel quicker when I’m pushing outlet.”

Though Hoggard is the best returning option at the point, and MSU added freshman combo guard Jaden Akins, Izzo still pursued Walker. The 6-foot, 175-pound junior averaged 18.8 points, 4.8 assists and 2.4 steals last season for Northeastern, becoming a first-team all-Colonial Athletic Association pick and winning the league’s defensive player of the year award. He also emerged as a finalist for two national awards — the Lou Henson Award, which goes to the top mid-major player, and the Lefty Driesell National Player of the Year, given annually to the top defensive player in Division I.

Hoggard said Wednesday he and Walker have played against each other since fourth grade in travel competition. Both are from the East Coast — Walker from Westbury, New York (on Long Island) and Hoggard from Coatesville, Pennsylvania, a Philadelphia suburb.

“Tyson made me a lot better&mldr;,” Hoggard said. “Growing up going to the tournaments, we played each other every weekend. We formed a relationship since fourth grade, our parents know each other. So him coming here kind of gave me a sense of back home.”

And with that shared background comes a grittiness and competitiive nature seemingly inherent in guards from the East Coast. It is something Hoggard said he admires in Walker and tries to emulate, which he feels is bringing out the best in both ahead of Nov. 9’s the season opener against Kansas at the Champions Classic.

Fittingly for them, at Madison Square Garden in New York.

“It’s great, because we can go here, we can almost get into an argument, altercation — however you want to call it — on the court, because we’re competing and because we’re both competitors,” Hoggard said. “And afterward, we can go to the locker room like nothing happened, because that’s my brother.”

Before facing Kansas, the Spartans will host Ferris State on Oct. 27 and Grand Valley State on Nov. 4. Both exhibition games against Division II opponents will tip off at 7 p.m. at Breslin Center and be streamed on Big Ten Network-Plus.