A tip for getting a COVID-19 test: Skip Tropical Park for less busy sites in Miami-Dade  msnNOW

He saw people wait so long their cars ran out of gas, and had to wake up multiple drivers sitting in parked vehicles, asleep in the slow-moving lines in a site administering roughly 8,000 tests a day.

“It’s okay now,” Rumayor said Wednesday afternoon as twin line of cars made steady progress through a system now requiring about two hours before getting a COVID-19 test performed by a technician. “Last week was incredible.”

Nomi Health, the company that runs Miami-Dade’s free testing sites, continues to report record numbers this week as the highly contagious omicron version of COVID spreads across the country at a time when many would be wanting tests anyway for holiday travel.

But administrators say they’re seeing some relief from epic waits seen during the pre-Christmas rush after the county opened more sites, expanded some to 24-hour operations and people sought out satellite facilities where lines are often short.

He said this week’s re-opening of a test site five miles away at the Youth Fair facility seems to have helped draw some of the demand away from Tropical Park. Miami-Dade has about 30 testing sites across the county, and a Miami-Dade website lets users search locations by ZIP code.

“We want people to be familiar with all of the sites in the area,” he said. “Don’t just focus on going to Tropical and waiting.”

Miami-Dade’s testing system faces a new challenge this weekend, with most sites closed on New Year’s Day. That will leave people seeking a county test with one day of full capacity before Monday, when schools and many offices return from a holiday break.

“You’re going to have a rush on testing on the 2nd,” said Miami-Dade Commissioner Raquel Regalado, who is urging Mayor Daniella Levine Cava to encourage county staff to work at home next week to allow more time for testing after New Year’s. “People are not going to get those results in time to make an educated decision.”

Greg Rubin, the assistant county fire chief overseeing Miami-Dade’s testing stations, said about 80% of the test results come back within 24 hours, with some taking as long as 48 hours.

Nomi processes results at a temporary lab set up at PortMiami, with couriers picking up specimens for testing about 200 times each day.

Rubin said the omicron surge has broken past records for COVID-19 tests at county sites.

“The demand has just been overwhelming,” Rubin said.

Miami-Dade kept most of its testing sites open after the summer delta wave subsided, and has added some locations as the omicron surge broke new records on tests. While the county conducted about 25,000 COVID tests a day in late August, now sites are performing more than 60,000 daily.

Rubin said the Levine Cava administration is interested in posting wait times for testing sites to make it easier for people to avoid clogged lines at places already overwhelmed. But Nomi said it doesn’t have yet a way to track full wait times for when cars back up past registration spots. “Tracking wait times is challenging,” Rubin said.

Goncalves, the Nomi executive, said the company doesn’t want to risk posting inaccurate or incomplete wait-time information and cause more frustration. “The last thing we want is for people to feel they were misinformed,” he said.

Sonia Diaz, 45, has spent about a week watching the snaking line of cars at Tropical Park near her home and said she dreaded going there for a test she wanted done before a New Year’s Eve party. Instead, Diaz drove to downtown Miami Thursday for a walk-up testing site at the Salvation Army, where it took her only 30 minutes to get tested.

“It turned out to be a great choice,” she said. “They were playing music the whole time, which was a lot of fun.”

There was no music Wednesday night after sunset at the South Dade Government Center, a 24-hour county site that is the second-busiest location behind Tropical, conducting about 5,400 tests per day. Mark McKinney, 65, was in his truck shortly after 6 p.m., feeling sick and advancing steadily after about 30 minutes in line.

“I’ve been experiencing coughing, fever and chills,” he said. “I really am appreciative this is here.”

Earlier that afternoon, Jaisy Orta, 36, was about an hour into her wait at Tropical Park, with probably an hour to go before getting a test. She had already tested positive with a home test after feeling COVID symptoms around Christmas, and came to Tropical Park in hopes of getting better news.

“I want it done by a professional, and not just me sticking something up my nose,” she said shortly after 4 p.m. In quarantine, Orta said she’d been waiting for a report from her mother on when the wait seemed reasonable for a trip to Tropical.

“She said the lines seemed to be better,” Orta said. “So I came here.”

Doug Hanks covers Miami-Dade government for the Herald. He’s worked at the paper for nearly 20 years, covering real estate, tourism and the economy before joining the Metro desk in 2014.
Support my work with a digital subscription 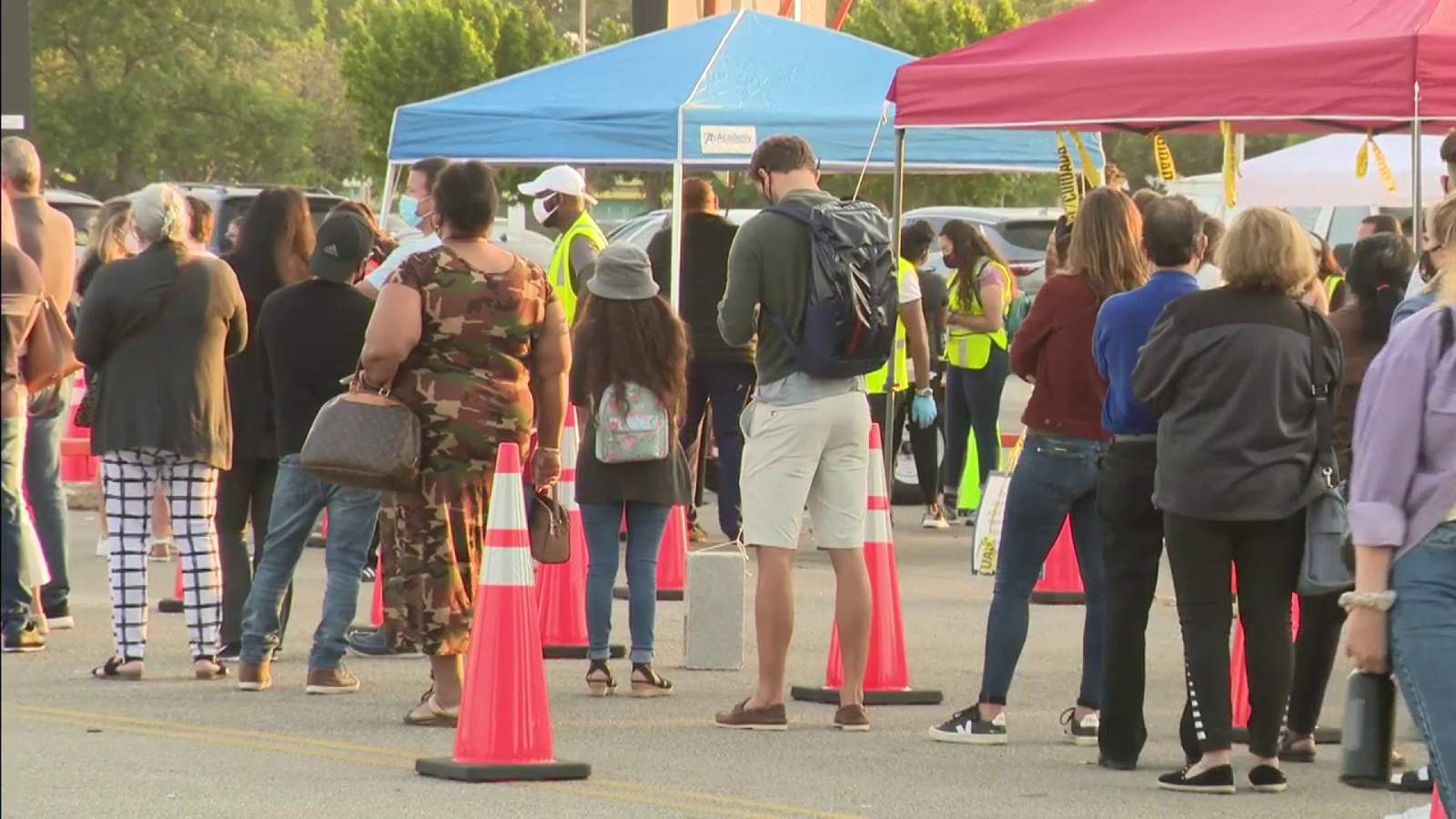 MIAMI-DADE COUNTY, Fla. – Despite the high demand, a representative from the FEMA-supported vaccination site at Miami Dade College’s North Campus says he believes there will be enough COVID-19 vaccines for everyone who shows up Wednesday.

Walter and Vielka Truax drove all the way from Naples to get the vaccine at the site in northwest Miami-Dade.

“The lottery system over there was very frustrating,” Walter Truax, 65, said. “You have to get up every morning at 7 o’clock and get online. We did it for about two or three weeks. We could never get a slot. And then someone told me about this FEMA place.”

The couple is among thousands of people who are coming to the site Wednesday as the age eligibility requirement was lowered this week.

Sky 10 was above the site Wednesday morning as long lines of people waited for their turn.

“I was waiting for two hours outside, but then when I got inside, it took me 15 minutes. Yeah, it was great,” Marcelle Collares, 21, said.

Wednesday is the second day the site is only offering the Johnson & Johnson vaccine and second-dose Pfizer vaccines.

“I used to work for Johnson & Johnson for three years, so I trust the company,” Eric Williams, 41, said. “They’re a very ethical company and I’m sure they wouldn’t put something on the market that wasn’t going to be effective and safe.”

Tuesday was a record-breaking day for vaccinations.

More than 10,000 vaccines were administered across four different sites run by the Florida Division of Emergency Management.

So many people are showing up that initially staff feared there would be a supply shortage Tuesday, but a representative says they wound up having enough vaccines after all.

Vaccinations will continue at Miami Dade College North until 7 p.m. Wednesday and the site will reopen at 7 a.m. Thursday.