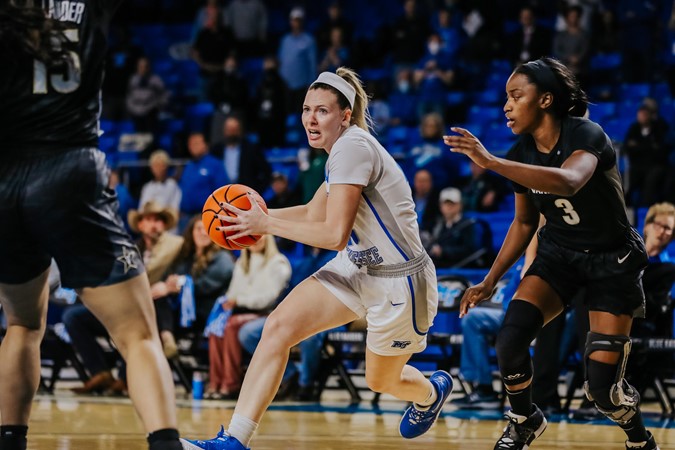 
HATTIESBURG, Miss. – Middle Tennessee women’s basketball wraps up its three-game road stretch at Southern Miss Jan. 22. Including Saturday’s game, the Lady Raiders have spent five of the past seven games away from the Murphy Center.

The Blue Raiders (12-4, 4-2 C-USA) are looking to bounce back from a two-point loss at FIU. The Golden Eagles (11-5, 3-2 C-USA) sit in second place in Conference USA’s west division while Middle Tennessee is currently fourth in the east coming into the weekend.

Middle Tennessee dropped its second conference game of the season in a 54-56 overtime loss at FIU.

Down by 14 in the first half, the Blue Raiders led twice in the fourth quarter and once in overtime despite 18 turnovers and just six made 3-pointers.

Anastasiia Boldyreva had one of her best performances with MT, finishing with 10 points, 10 rebounds and four blocks. Alexis Whittington was the other Lady Raider to score double figures with 12 points along with four rebounds.

Putting Middle Tennessee on the map

How good has the Blue Raider defense been? The following is where Middle Tennessee ranks nationally in several categories.

Road Raiders
The Lady Raiders are 147-80 overall on the road under Head Coach Rick Insell. In C-USA play, Insell’s teams are 51-16.

This season, MT is 6-4 in both away and neutral site games.

Southern Miss carries a three-game winning streak into Saturday. The average margin of victory during the streak is 5.6 points. The Golden Eagles are 7-1 at home with the only loss coming against Arkansas Pine Bluff Nov. 26.

Joye Lee-McNelis has led the Southern Miss women’s basketball program since 2004 and is 263-239. 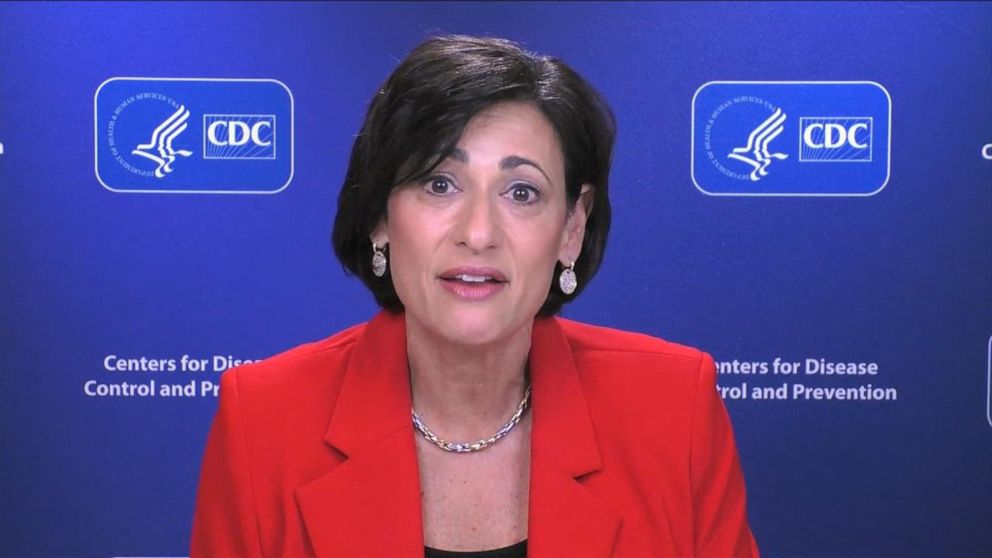 BRUSSELS — The European Union ended travel restrictions on flights from southern Africa on Monday well over a month after imposing them to in hopes of containing the spread of the omicron variant of the coronavirus.

The highly contagious variant was first discovered in southern Africa in late November and the 27-nation bloc restricted travel for visitors from that region, where the variant brought on a sudden surge of infections.

Omicron has since become the dominant variant and is responsible in the EU and many other nations for a unprecedent increase in infections. That made the travel ban from southern Africa a moot point.

The French EU presidency announced Monday that the 27 member states agreed “to lift the emergency break to allow air travel to resume with southern African countries.”

It insisted that travelers from South Africa and neighboring countries will still be subject to the other health measures on vaccinations and recovery from the disease that other third-nation visitors also face. 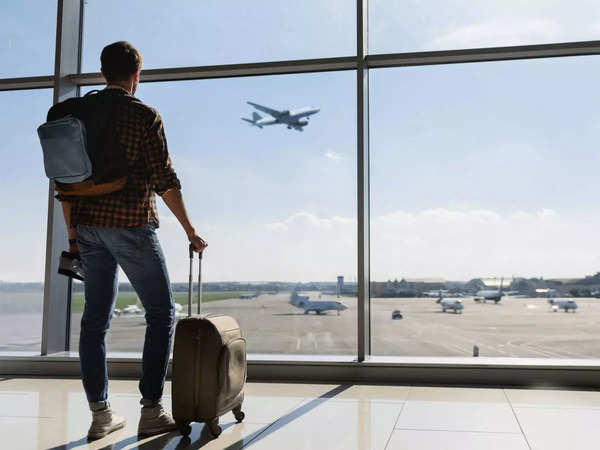 The European Union ended travel restrictions on flights from southern Africa on Monday well over a month after imposing them to in hopes of containing the spread of the omicron variant of the coronavirus. The highly contagious variant was first discovered in southern Africa in late November and the 27-nation bloc restricted travel for visitors from that region, where the variant brought on a sudden surge of infections. Omicron has since become the dominant variant and is responsible in the EU and many other nations for a unprecedent increase in infections. That made the travel ban from southern Africa a moot point.

Uttar Pradesh | With number of active Covid cases crossing 1000 mark in Agra on Monday, the district admin imposed fresh restrictions in the city. Gyms & swimming pools have been closed down. Wearing of mask would be mandatory: Agra District Magistrate Prabhu N Singh

North Korea fired what may be a ballistic missile, the Japanese coast guard said, the second apparent launch in less than a week after leader Kim Jong Un urged the military to make more military advances: Reuters

Days after ICMR chief Dr Balram Bhargava said that molnupiravir has major health safety concerns, some of India’s top health experts said the benefits of the drug outweigh potential risks. Studies so far have shown no convincing side-effects among humans, they said.

Over 10.5 lakh receive ‘precaution dose’ on first day of roll out

Ludhiana, Punjab | With a surge in coronavirus cases migrant workers and daily wagers fear another round of lockdown that could push the manufacturing industry into a financial crisis: DS Chawla, president, United Cycle And Parts Manufacturers Association 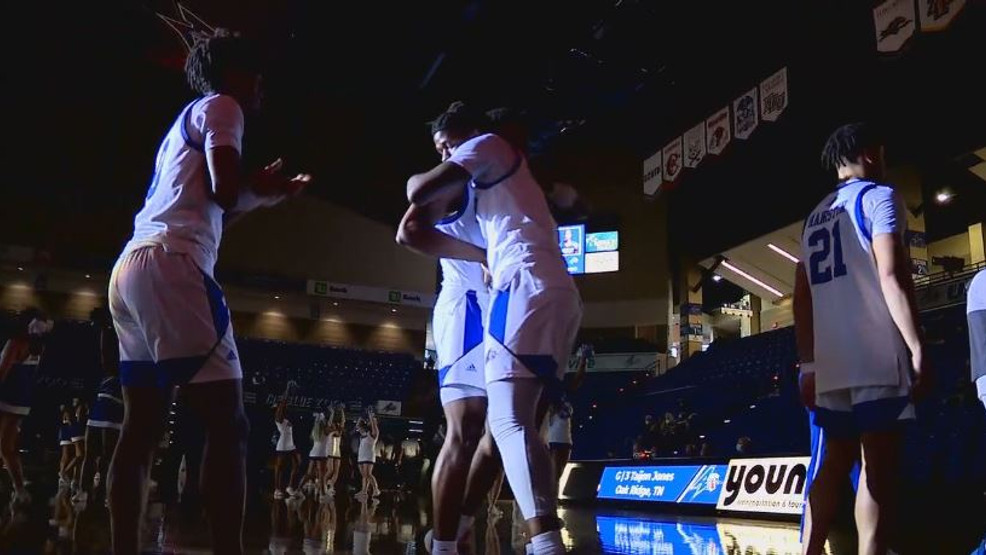 this link is to an external site that may or may not meet accessibility guidelines.

Forecasters are predicting widespread moderate to heavy snowfall with gusty north winds Saturday afternoon and into the evening, with the highest totals across southeast Wisconsin heading closer to Lake Michigan.

A winter weather advisory is in effect until 3 a.m. Sunday per a probable one to five inches of snow for parts of southern Wisconsin, including Madison and Dane County. Dodge and Sheboygan counties have been removed from the advisory, but up to two inches of snow is still expected for both areas.

A winter storm warning is in effect until 6 a.m. Sunday per a possible five to eight inches of snow for southeastern Wisconsin, according to the National Weather Service.

“Travel will become hazardous after the snow arrives, so use caution,” the weather service said.

Starting between 3-4 p.m., Madison has a 90% chance of receiving one to two inches of snow moving in from the south, with the up to eight inches closer to Lake Michigan — down from the nine inches the weather service predicted Friday.

“Snow is reaching the ground in far southern Wisconsin,” the weather service said. “Currently, it is not reaching the ground further north but will start later this afternoon. Be prepared for roads to become quickly snow covered and slippery with limited visibility. Take it slow.” 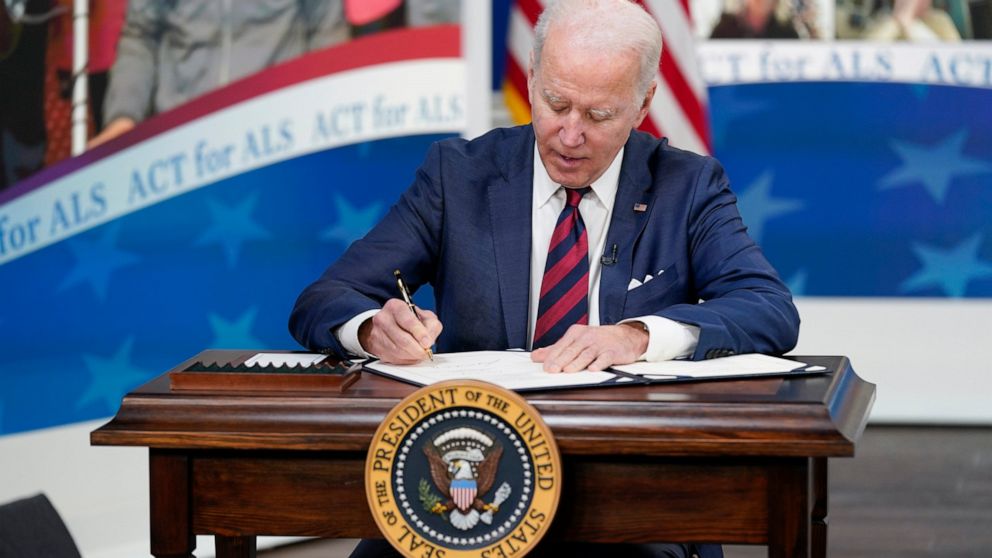 The restrictions, imposed last month, were meant to blunt the spread of the COVID omicron variant.

The Nov. 29 ban barred nearly all non-U.S. citizens who had recently been in South Africa, Botswana, Zimbabwe, Namibia, Lesotho, Eswatini, Mozambique and Malawi.

White House spokesman Kevin Munoz said on Twitter that the decision was recommended by the Centers for Disease Control and Prevention. Munoz said the temporary travel bans bought scientists necessary time to study the new virus variant and conclude that the current vaccinations are effective in blunting its impact.

Omicron is now spreading rapidly throughout the U.S., including among the vaccinated, but a huge majority of those being hospitalized are unvaccinated.

“The restrictions gave us time to understand Omicron and we know our existing vaccines work against Omicron, esp boosted,” Munoz wrote on Twitter. 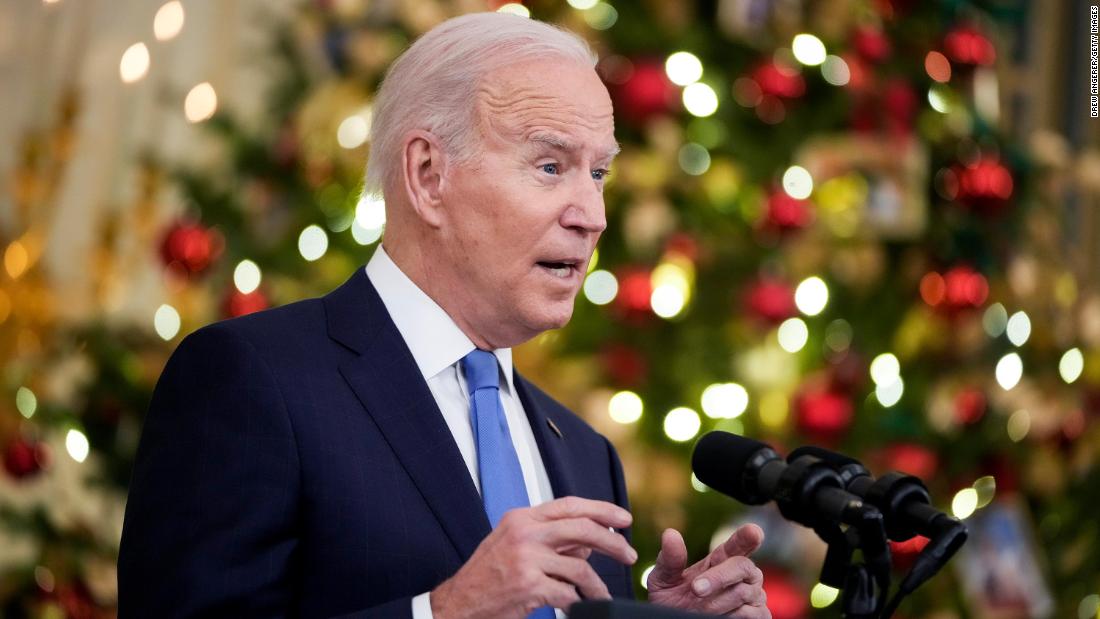 The ban has come under increasing scrutiny as the strain is already the predominant one in new cases in the US, and has run rampant in other countries that have not seen similar travel restrictions.

“I’m considering reversing (the travel ban), I’m going to talk to my team in the next couple days,” Biden told reporters after a speech on Covid-19 at the White House.

In late November, Biden acted on advice from the nation’s top infectious diseases expert, Dr. Anthony Fauci, and the US Centers for Disease Control and Prevention by restricting travel from South Africa, Botswana, Zimbabwe, Namibia, Lesotho, Eswatini, Mozambique and Malawi. The Omicron variant eventually made its way to the US and is now the dominant strain of coronavirus in the country, accounting for more than 73% of new cases, according to the CDC.

“Remember why I said we put the travel ban on — it was to see how much time we had before it hit here so we could begin to decide what we needed by looking at what was happening in other countries,” Biden said. “And we’re past that now, and so it’s something that’s being raised with me by the docs and I’ll have an answer for that soon.”

For days the White House has been giving a similar answer on the restrictions. On Monday, White House press secretary Jen Psaki said the ban was never meant to be permanent, and that the administration was “continuing to assess day to day the decision to lift that ban.”

This is a breaking story and will be updated. 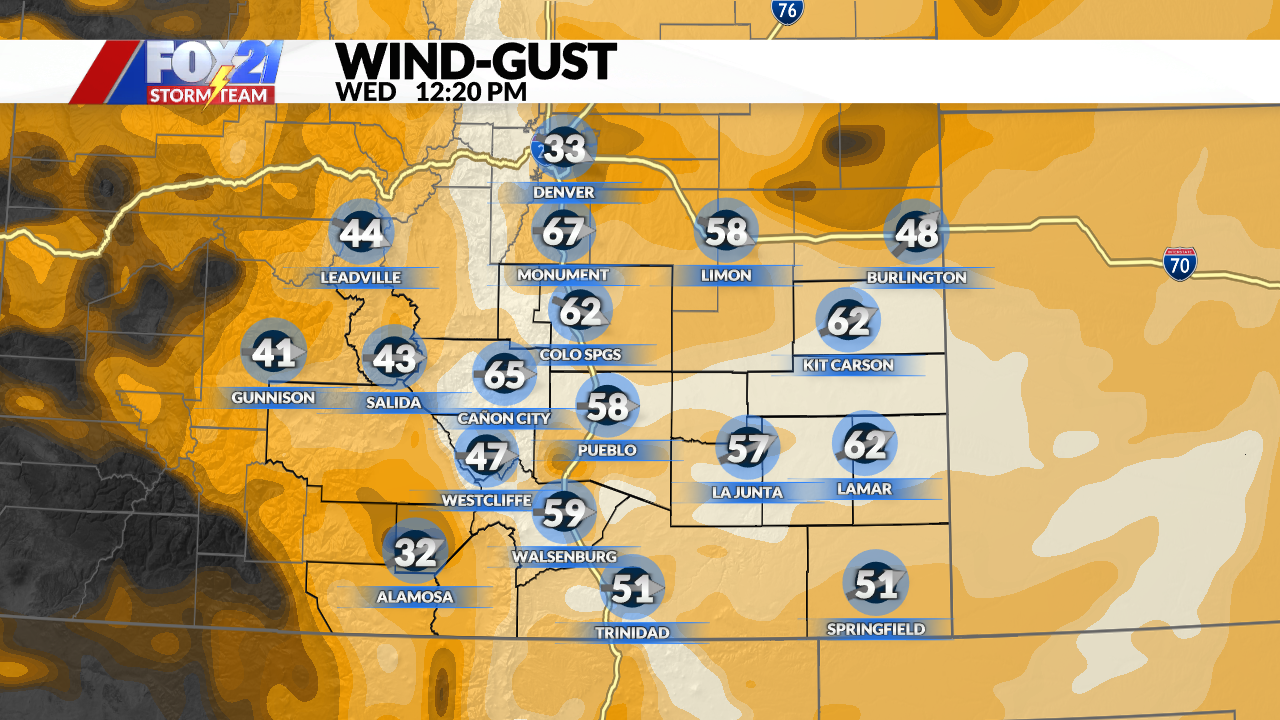 COLORADO SPRINGS – A powerful storm system moving out of southern California and into the southern Rockies will mean snow, strong winds and high fire danger for southern Colorado.

Very strong and potentially damaging winds are becoming more likely on Wednesday. West winds gusting to 60 to 80 m.p.h. are possible with the potential for a few gusts beyond that. These wind speeds could bring down some tree branches and could cause some power outages. Blowing dust will also be possible, particularly in open areas. Travel will be difficult for lightweight and high profile vehicles.

Due to the very strong winds anticipated, a High Wind Warning is in effect for much of the area from Wednesday morning into Wednesday afternoon. Please secure any loose objects such as patio furniture and trash cans.

Humidity levels will be quite low along with the strong winds, making fire danger very high to critical across much of the area. Because of this, a Red Flag Warning is in effect for much of the area. Any fire that starts will quickly get out of control as conditions will be favorable for rapid fire growth and spread. The Red Flag Warning is in effect from 10:00 a.m. through 5:00 p.m. on Wednesday.

Along the front responsible for the winds, some heavy mountain snow will occur late tonight into Wednesday morning. Snowfall rates in the mountains may approach 2 to 3 inches per hour. This, combined with strong winds, will make travel extremely difficult, if not impossible.

As the front moves into the foothills and I-25 corridor, there could be a few brief, intense snow squalls that would create very low visibility and could drop a quick 1/2 inch or more of snow along with strong, gusty winds which could significantly impact travel in localized areas for short amounts of time.

Stay tuned to FOX21 News for the latest on this intense wind and snow storm moving through on Wednesday.

WASHINGTON (Reuters) – Anthony Fauci, the top U.S. infectious disease official, said on Sunday he hopes the ban on travelers from southern African countries can be lifted in a “reasonable period of time” as more information is gathered on the Omicron variant of the coronavirus.

Fauci said on CNN’s “State of the Union” program that U.S. authorities are mindful of the hardship the travel ban is causing in those countries and are constantly re-evaluating the policy.