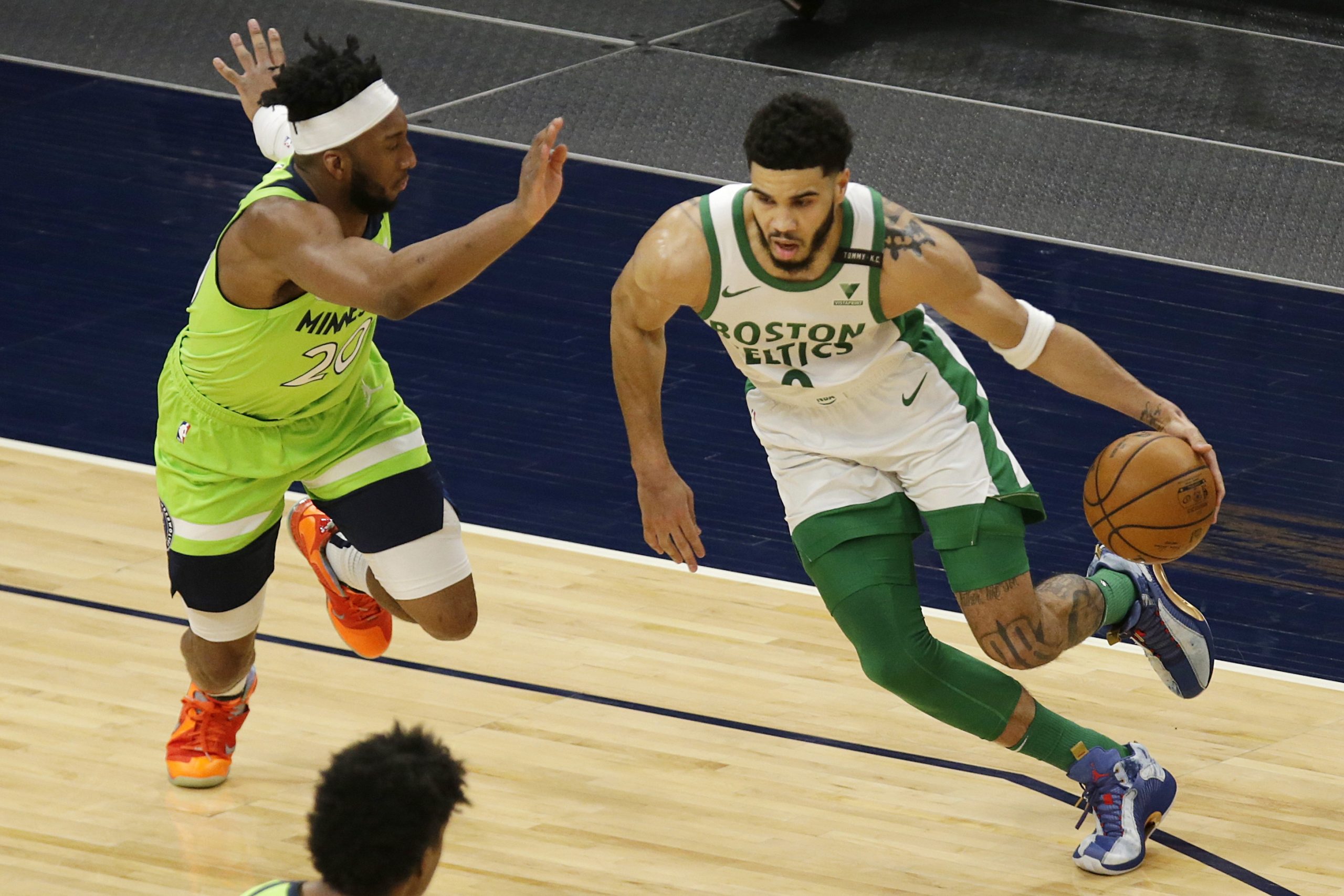 MINNEAPOLIS (AP) — Jayson Tatum had 26 points and 11 rebounds as the short-handed Boston Celtics cruised to a 124-108 win over the Minnesota Timberwolves on Saturday.

Evan Fournier added 18 points and was 5 of 8 from 3-point range. Six Celtics scored in double-figures as Boston snapped its four-game losing streak.

The Celtics can’t improve their playoff positioning in their final two games but want to head into the postseason on a high note.

“It’s always important to play well, always,” Fournier said. “It doesn’t matter who you’re playing against, what the circumstances are.”

Karl-Anthony Towns led Minnesota with 24 points and 14 rebounds. It was his 27th game of the year with 20-plus points and 10-plus rebounds. Rookie Anthony Edwards scored 23 points in the loss.

“I thought we wasted a day,” Towns said.

Minnesota trailed by as many as 23. The Wolves cut the Celtics lead to 11 midway through the fourth quarter on an Edwards three-point play but never got closer.

Boston coach Brad Stevens put Tatum and Fournier back into the game in the fourth when Minnesota trimmed the lead to 11.

“We needed to feel good,” Stevens said. “I thought it was really important when we step on this plane today to feel a little bit better about the win with the right mentality.”

The Celtics connected on 13 of 30 shots from the arc in the first half to build a 66-47 halftime lead. Minnesota was just 2 of 17 from deep in the first two quarters, with its starting lineup going 0 of 14 from 3-point range.

The Wolves shot 13.5 percent (5 of 37) from deep for the game, its worst percentage of the season.

“It doesn’t look like they’re locked in to finish the season the way we wanted to,” Timberwolves coach Chris Finch said.

On the day when Kevin Garnett was inducted into the Basketball Hall of Fame, two of his former teams faced off — and shared — memories about the talented big man.

Stevens took the Celtics job the year after Garnett left Boston for Brooklyn. The two were the same year in high school and Stevens first saw Garnett play in an AAU tournament.

“When he walked out on that court and I watched him running up and down that court, I was like, ‘Oh my goodness,’” Stevens said. “He was the best kid in our class, obviously.”

Garnett spent his first 12 seasons with the Wolves and was traded to Boston before the 2007-08 season. Garnett helped lead the Celtics to an NBA title in his first year with the team.

Celtics: Williams did not travel with the team and also will not play Sunday at the Knicks, Stevens said. … Center Luke Kornet made his first start of the season.

Celtics: Boston’s regular season ends with a game Sunday in New York against the Knicks, less than 24 hours after Saturday’s game in Minnesota.

Timberwolves: Minnesota closes out its season by hosting the Dallas Mavericks on Sunday at Target Center.