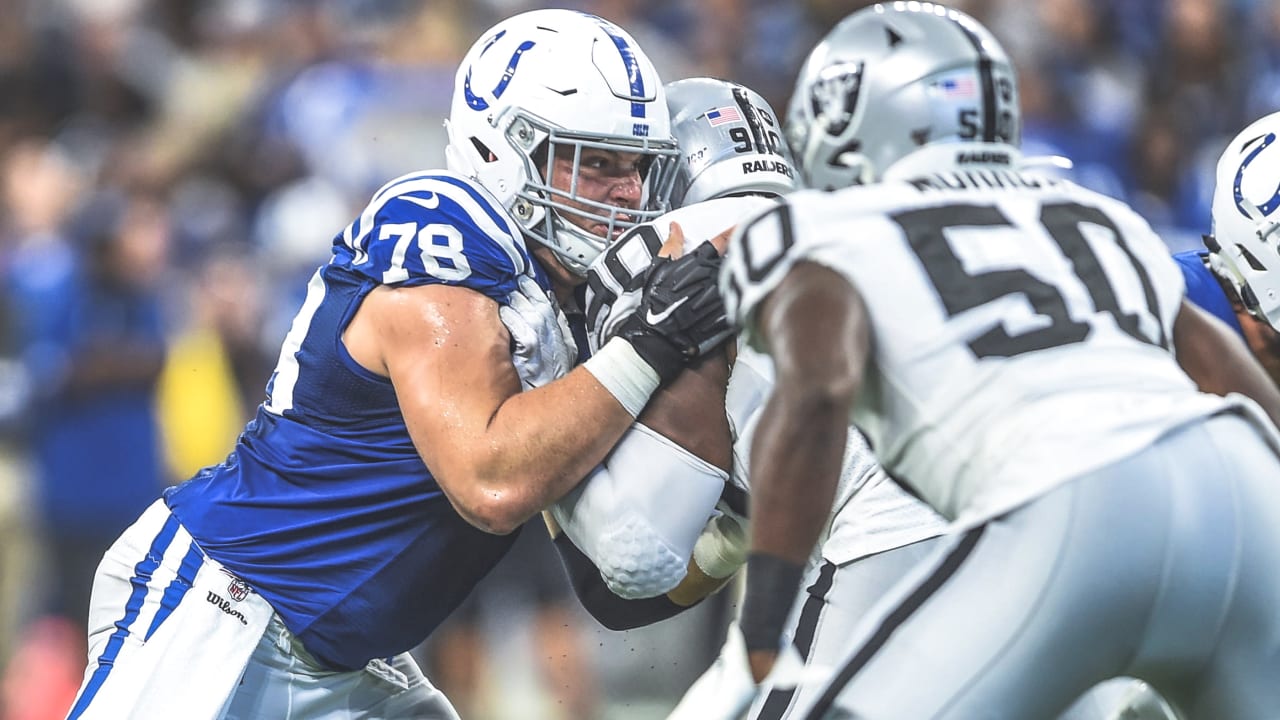 — With one point, he will pass Edgerrin James (102) for the third-most points by a rookie in franchise history.

— With two points, he will tie Mike Vanderjagt (104) for the second-most points by a rookie in franchise history.

— With three points, he will pass Mike Vanderjagt (104) for the second-most points by a rookie in franchise history.

— With one game played, he will reach 75 career games played.

— With one game started, he will reach 75 career games started.—

— With one defensive or special teams return for a touchdown, he will tie Ray Buchanan and Terrence Wilkins (three) for the most such touchdowns in single-season franchise history.

— With one touchdown, he will pass Joseph Addai (48) for the 10th-most total touchdowns in team history.

— With one game started, he will reach 125 career games started.

— Needs 3.0 sacks to reach 100.0 for his career. He would become the 35th player in NFL history to reach that plateau since sacks became an official statistic in 1982.

— With one safety, he will pass Ted Hendricks, Doug English and Jared Allen (four) for the most safeties in NFL history.

— With two tackles, he will tie Jerrell Freeman (366) for the second-most tackles in a player’s first three seasons in Colts history.

— With three tackles, he will pass Jerrell Freeman (366) for the second-most tackles in a player’s first three seasons in Colts history.

— With two tackles, he will reach 400 career tackles.

“Yeah, I’m not going to lie, it did feel good and it feels like it’s the way it should be. It’s not going to be that way every game, but he is our leader. He is our leader at that position. He is one of the emotional leaders of this team. He has a presence about him and a confidence about him that the team feeds off of. It was great to get him going on Sunday.” — Colts head coach Frank Reich on wide receiver T.Y. Hilton’s breakout performance last Sunday against the Houston Texans.

“Yeah, I certainly don’t feel 29, but at the same time I feel good. But it does, it kind of made me chuckle a little bit yesterday just to think I’m 39 and I’m still getting to play a game. I’m playing a game. One of my children actually asked me how long have you been playing football and I was thinking back – I was obviously around it since I was little. I didn’t play tackle football until seventh grade, but you look at whatever that is and that’s 27, 28 years. It sounds kind of crazy – been playing a game and still getting to play it. Yeah, I don’t really think about it much. I think when you get upwards in age, the birthdays aren’t I guess as big of a deal as far as a party and all that stuff, especially when you have nine little ones to celebrate their birthdays. They tend to take the – the excitement tends to go their way from a birthday standpoint.” — Colts quarterback Philip Rivers on turning 39 years old this week and how he’s feeling physically.

“I would say that when you have a presence like that in the middle, as been stated before in terms of the 3-technique in our defense and really when you’re strong up the middle in any defense that’s a good thing because it affects the run and it forces double teams to stay on longer in the run game, it forces protection to slide that way in the pass game. There are a lot of things that it does that benefits the linebackers as well as the secondary. So the effect of an interior defensive lineman like DeForest Buckner is really immense when you think about the ripple down effect it has on the run defense and the pass defense.” — Colts defensive coordinator Matt Eberflus on the difference he notices when defensive tackle DeForest Buckner is in the game.

“Man, he brings a lot to our offense and he has just gotten better and better and better and better. We have so much confidence in Braden (Smith) and I’ve really seen big, big growth this year particularly in the pass game and his protection. So credit to Coach (Chris) Strausser and Coach Klayton Adams, they have been developing him and are doing a great job developing him. We want to be a physical team, and no matter what we’re doing whether it’s passing the ball or running the ball – just because you pass it doesn’t mean you can’t be physical. We want to be a physical team and Braden is one of our most physical players. In the run game, in the pass game, everything, he is one of our most physical players whether he is getting out on a screen – everything like that. He just brings so much to this offense. He had a phenomenal game against a really good football player on Sunday. He just continues to get better and we’re thrilled that he is who he is, he has continued to get better and he is on this team.” — Colts offensive coordinator Nick Sirianni on the continued improvement of third-year right tackle Braden Smith.