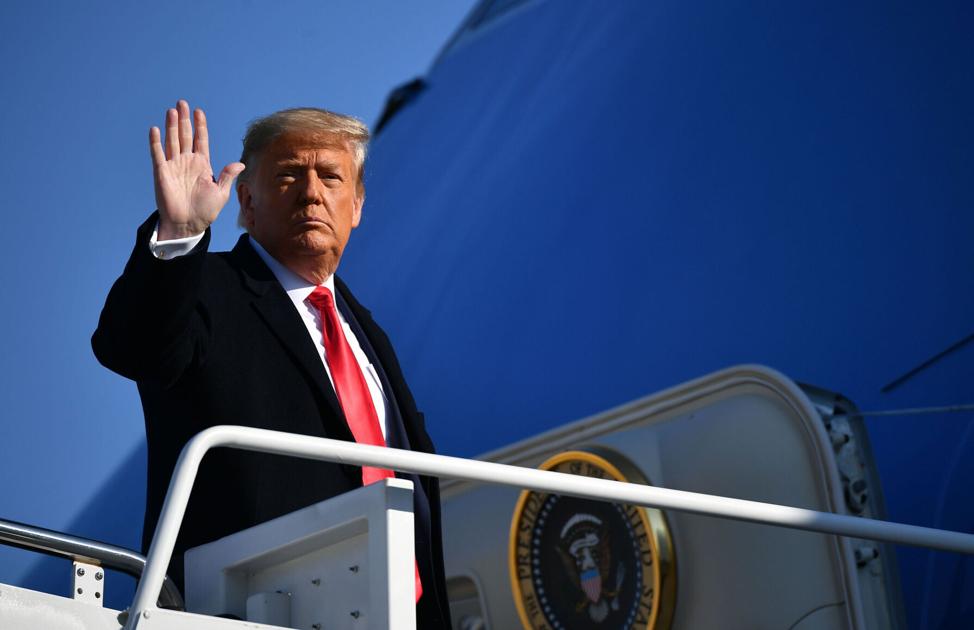 The message from Jen Psaki came Monday evening after the White House said President Donald Trump had lifted the restrictions for those countries, effective Jan. 26.

Psaki then tweeted: “On the advice of our medical team, the Administration does not intend to lift these restrictions on 1/26.”

She added, “In fact, we plan to strengthen public health measures around international travel in order to further mitigate the spread of COVID-19.”

Trump imposed the travel restrictions early in the pandemic to slow the spread of the coronavirus to the U.S. They prevented most people without American citizenship or residency from traveling to the U.S. from the affected regions.

— Brazil approves two coronavirus vaccines, ones by Sinovac and Oxford-AstraZeneca

— China’s economy grows in 2020 as it rebounds from virus, likely only major economy to expand

OLYMPIA, Wash. — Washington Gov. Jay Inslee has announced a plan to set up coronavirus vaccination sites statewide with help from the National Guard and others as part of an overall goal to vaccinate 45,000 people a day.

Inslee said Monday that while the goal is currently higher than the current allotment of vaccine the state is receiving from the federal government, the state is working to get the infrastructure in place now for when the supply increases.

The governor also announced a public-private partnership with business, health care and labor entities on areas ranging from coordination of volunteer vaccinators to communications support.

JACKSON, Miss. — More than 100,000 people in Mississippi have received their first dose of the coronavirus vaccine, and officials are taking further steps to administer the state’s supply of shots more efficiently, Gov. Tate Reeves said Monday.

Inoculation rates in Mississippi have lagged far behind most of the U.S., according to the federal Centers for Disease Control and Prevention. But Reeves insisted Monday that health officials are making changes to speed things along.

The state’s website for making vaccine appointments has been upgraded to handle increased traffic, and more people are answering calls from those booking by phone, he said.

Meanwhile, state officials are working to free up more shots for the general population aged 65 and older by getting several thousand doses from nursing homes that received more than they need, Reeves said.

LOS ANGELES — California’s state epidemiologist is urging a halt to more than 300,000 coronavirus vaccine doses by Moderna because some people who received it needed medical treatment for possible severe allergic reactions.

Dr. Erica S. Pan is recommending that vaccine providers stop using one lot of the Moderna vaccine pending completion of an investigation. She says less than 10 people who were inoculated at a single vaccination site needed medical attention.

But she also said serious reactions to vaccinations are extremely rare.

The virus has claimed more than 33,000 lives in California.

The program opens the state’s vaccine rollout beyond the first high-priority group that includes healthcare workers and long-term care residents and staff.

The nine sites will start inoculating people Thursday by appointment-only due to the small number of available doses.

The announcement comes after the Democratic governor accused the Trump administration of “lying” when he and six other governors asked for permission to receive their states’ second doses from a national stockpile to ramp up vaccination efforts.

The governors were told by federal officials that the administration would release the federal reserve of doses, but later learned the stockpile had already been exhausted.

BISMARCK, N.D. — North Dakota reported on Monday zero coronavirus deaths for the fifth time this month, although the fatality rate by population continues to be among the worst in the country.

The state’s death count, which stands at a total of 1,384, is the sixth highest per capita in the country at 185 deaths per 100,000 people, according to John Hopkins University researchers.

North Dakota’s 14-day rolling average of daily new cases has decreased by more than 27%, according to The COVID Tracking Project data. The state has experienced a steady decline in daily new cases since the virus case count peaked in mid-November. It now ranks 48th per capita in the U.S. for new cases over the last two weeks.

A statewide mask mandate that was enacted in mid-November was allowed to expire Monday morning.

ST. LOUIS — More than 172,000 people in St. Louis County have registered for the COVID-19 vaccine, but the the local health department so far has only received 975 doses, county Executive Sam Page said Monday.

The county expects more doses to arrive Tuesday but it was unclear how many, the St. Louis Post-Dispatch reported.

Page also urged residents to be honest about the information they use to register for vaccinations, saying some have falsely claimed to be health care workers or brought along family members who are ineligible at this time.

A new inoculation phase began Monday in Missouri that allows older people and those with certain pre-existing conditions to be vaccinated.

PRAGUE — The fast-spreading coronavirus variant first identified in the U.K. has been found in the Czech Republic, a health official said Monday.

The National Institute of Public Health confirmed its findings after it announced over the weekend it was testing suspected samples.

Health Minister Jan Blatny says the variant accounts for about 10% of all sequenced samples in in the country. No further details were provided.

The country of 10.7 million has reported 891,852 confirmed coronavirus cases and 14,449 deaths since the start of the pandemic.

The daily infection rate has been in decline since Jan 6., prompting the government to allow stores selling stationary and children’s clothes and shoes to reopen. The country still remains under a tough lockdown with a nighttime curfew.

Monday’s figures brought the total number of confirmed cases since the start of the pandemic to 2.34 million and known deaths to 53,769.

Despite the substantial daily increases, Health Minister Salvador Illa on Monday insisted the measures taken by each of Spain’s 17 regions are enough to quell the increase, ruling out a total lockdown.

Spain’s health emergency chief Fernando Simon said that the country could be at the peak of the latest surge or getting close to it.

ROME — For the first time in three weeks, Italy’s daily caseload of known coronavirus infections dropped below 10,000 on Monday.

Health Ministry figures reported 8,825 additional cases since Sunday, bringing the total number of confirmed infections to 2.4 million since the start of the pandemic.

The nation’s known COVID-19 death toll of 82,554 is the second highest in Europe.

MADRID — The tiny British colony of Gibraltar says it has lost more people to the coronavirus since the start of the year than from any other single cause in the past century.

“Even in war, we have never lost so many in such a short time,” Gibraltar Chief Minister Fabian Picardo said on Monday.

He said 21 people had died from the virus in the past three days, bringing the colony’s total virus deaths to 45 since the start of the pandemic.

Located on Spain’s southern coast, Gibraltar has recorded some 4,000 cases. It has been under lockdown since the beginning of January.

BERLIN — Swiss authorities say they have placed two hotels under quarantine and ordered all guests and employees to be tested after a new variant of the coronavirus was detected among them in the upscale skiing resort of St. Moritz.

Officials did not reveal the names of the two affected facilities, but Swiss media said both were luxury hotels.

In addition to tests at the hotels, all residents of St. Moritz were being asked to be tested on Tuesday. Authorities ordered all residents to wear protective masks, and asked people to reduce their contacts to prevent the further spread of the virus.

“The health office is concerned,” authorities of the Graubuenden canton said in their statement. “The variant of the virus is clearly more contagious than the one that’s currently predominant globally.”

Swiss media reported that the variant of the virus detected in St. Moritz was the one first found in South Africa.

MOSCOW — Backers of the Russian COVID-19 vaccine Sputnik V say it has been approved in Turkmenistan, an ex-Soviet nation in Central Asia that hasn’t officially reported any infections so far.

The Russian Direct Investment Fund that bankrolled the development of the shot announced Monday that health officials in Turkmenistan approved Sputnik V “under the emergency use authorization procedure.” It wasn’t immediately clear whether Russia would ship the vaccine to Turkmenistan any time soon.

The vaccine is still undergoing advanced studies among tens of thousands of people needed to ensure its safety and effectiveness. Nevertheless, the shot last month was rolled out in a large-scale vaccination campaign in Russia. It has also received regulatory approval in several other countries, and immunization with Sputnik V has started in Belarus and Argentina.

Turkmenistan, a gas-rich nation of 5.9 million, hasn’t reported any coronavirus infections, but authorities have shut restaurants and non-food stores and recommended that the population wears masks to protect against dust and unspecified infectious agents. However, the British ambassador to the capital, Ashgabat, said last month that he had contracted the virus.

Parent company Emirates Group said Monday that all of its employees across the United Arab Emirates are now able to receive the Pfizer-BioNTech vaccine or the Chinese Sinopharm vaccine, both of which are available to high-risk groups free of charge in the country.

Emirates Group, which employs over 80,000 people, is among the first aviation organizations in the world to launch an inoculation drive for staff.

Dubai’s economy is powered by long-haul travel and aviation, industries hit hard by the coronavirus pandemic. The UAE has rolled out a mass vaccination campaign and ranks second in the world for vaccinations per person, with 19 doses administered for every 100 residents.