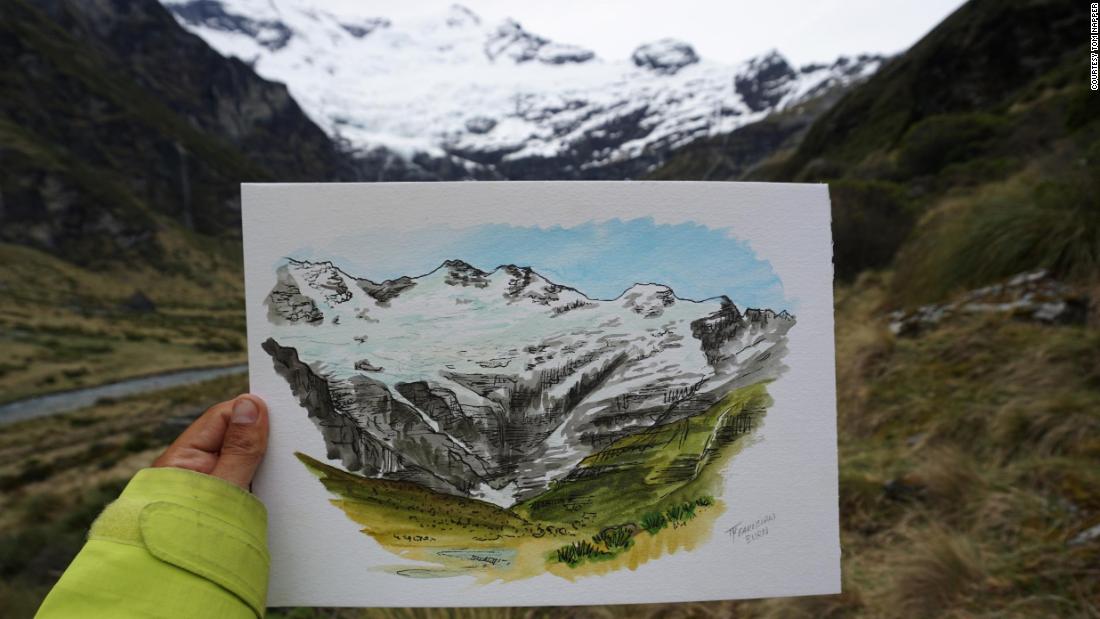 In 2021, Tom Napper is considering never having a permanent address ever again.

The English-born artist and graphic designer was so nervous about traveling by himself that he decided to join a group bike tour through New Zealand, where he’d have lots of natural opportunities to mingle with the other riders and make new friends.

But the coronavirus pandemic, which slammed New Zealand’s borders shut indefinitely the day before he was supposed to fly back to London, changed Napper’s plans — and his life.

Napper arrived in New Zealand on February 16, 2020 to take part in Tour Aotearoa, an organized bike tour where about a thousand travelers “bikepack” along 3,000 km (about 1,860 miles) of trails throughout the country. The trail begins at Cape Reinga (also known by its Māori name Te Rerenga Wairua) on the North Island and ends at Bluff on the southern tip of the South Island, and on average takes about 30 days to complete.

Participants are asked to take photos of each stop along the way to confirm that they’re following the route, but Napper asked for and got permission to do his visual check-ins as illustrations instead. Little did he know that these paintings would turn into a long-term project.

After completing the ride, Napper headed to the town of Balclutha to meet up with a college friend. The visit turned out to be anything but a nice chance to unwind before catching his flight home.

Napper’s drawing of the The Church of the Good Shepherd in Lake Tekapo.

“It turns out while I was cycling down New Zealand, the rest of the world was falling to pieces.”

Napper had to make a quick decision — try to book it home on an emergency flight, or wait out what he thought would be a quick closure in New Zealand. He chose the latter. As of publication, he is now applying for his fourth and presumably final extended tourist visa.

His initial 30 days have now turned into 15 months and counting, and the 30 paintings of stops along the bike route have become a long-term project to document all the places he has visited in New Zealand.

“I always wanted to be somebody who was brave enough to go solo traveling,” Napper says.

A native of Oxfordshire, he’d spent a decade in London and was starting to wonder if big-city life had an expiration date. Joining an organized tour — where 100 riders are “released” on to the trail every day and become a kind of loose cohort — gave him a way to explore a new destination without going 100% into solo travel land.

But then he got stuck in Balclutha during lockdown. Once he realized that the pandemic was, well, a pandemic — and not just a temporary blip — Napper kept taking advantage of tourist visa amnesties, extending and re-extending his stay. Thanks to some new friends he’d met along the bike tour, he was able to cash in some favors and stay in spare rooms and holiday homes between long-stay Airbnbs.

Luckily, as a freelancer, Napper was able to keep up with his work projects — and keep a stream of income going. Each month, he dutifully let his roommates back in London know that he was still not sure when he’d be able to come back before finally giving up the place altogether so he could stop spending rent on a flat he wasn’t living in.

Have you ever taken a day trip somewhere, fallen hard, and then regretted not rearranging your schedule to spend more time there? Welcome to Napper’s entire 2020. He re-visited some of the places he’d only breezed past while on his journey, including Queenstown and Mount Cook (Aoraki).

Solo travel isn’t just about sightseeing. It can often mean getting comfortable spending long stretches of time alone and not relying on other people to keep you busy.

“I don’t think I’ve been bored once in the last 14 months,” Napper says. “Doing the paintings has been just a huge anchor for me. I can happily spend the entire night in front of my laptop, preparing my artwork and sort of telling stories on social media and stuff like that. And it’s put me into a place where instead of me just going for a hike, I’m going for a hike and I’ve got an objective, and I’m creating a painting. And then I’m telling the story with that painting when I get back.”

Border restrictions in New Zealand have slightly loosened thanks to travel bubbles with Australia and the Cook Islands. Meanwhile, the UK has already begun a robust vaccination program and has re-opened bars, restaurants, museums and other businesses.

In another lifetime, that might have meant it was time for Napper to head home. But the once-reluctant solo traveler now doesn’t know what his next move will be. He’s considering a six-month stint in Australia or a long stay in Canada once he finishes his last New Zealand visa.

“I don’t have a home anymore. it’s been interesting seeing people’s comments online and stuff being like, ‘When are you coming home?’ And I’m like, ‘That word kind of has different meanings now.’ As far as I’m concerned, I’ve been home here.”