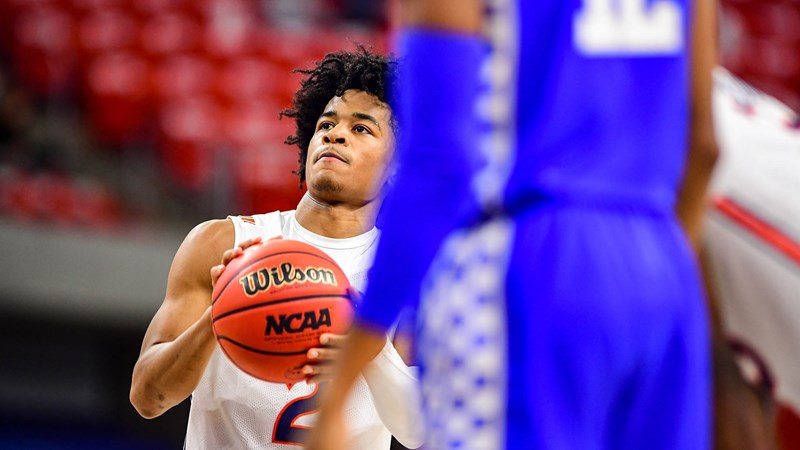 
AUBURN, Ala. – With just six games remaining on the schedule, there are only so many opportunities left for Auburn this season.

There might be no greater opportunity than Saturday when the Tigers travel to Rupp Arena to face Kentucky. Auburn is 2-49 at Rupp Arena all time. The last win there came in 1988. With a win Saturday, it would be the first time Auburn has ever swept the season series.

“The history speaks for itself,” Auburn head coach Bruce Pearl said. “It would mean a lot (to get a win). I think typically people judge you on how you do in the best competitions against the best teams on your schedule and against your rivals. It’s a great opportunity for us. Our guys will know the history that’s available to them.”

Record-wise, this is not your typical Kentucky team. The Wildcats are 5-13 and have won just once in their last eight games. But Pearl knows better than to underestimate this group.

Auburn is playing with confidence, too, especially after the second half at Vanderbilt where the Tigers exploded for 50 points and pulled out a victory on the road. Freshman Sharife Cooper took control, shots started to fall, and the team stepped up with the game on the line.

The road only gets harder the rest of the way, though. It begins with Saturday’s trip to Lexington.

“If we can put it together, we can play competitively,” Pearl said. “But with six games to go in the regular season, if we don’t play better than we did at Vanderbilt, it will be hard to win.”

Saturday’s game is scheduled to tip off at noon CT from Rupp Arena in Lexington, Kentucky. Andy Burcham and Paul Ellen will have the radio call on 93.9 Tiger FM, online at AuburnTigers.com and on the TuneIn app. The game will also be televised on CBS with Ian Eagle and Jim Spanarkel on the call. In his first 10 games, Sharife Cooper has proven he’s one of the top talents in the country. The Peach State native is one of three freshmen in the nation with four games of 25 or more points. Cooper leads the SEC with four games of at least 10 points, five rebounds and five assists this season. Through 10 games, he is averaging 20.2 points, 8.7 assists and 4.2 rebounds per game so far in the 2020-21 campaign.

Auburn and Kentucky will face off for the 118th time in series history Saturday afternoon. The Wildcats hold a 95-22 advantage overall, but Auburn has won five of the last nine meetings. Following a 66-59 win on The Plains in January, the Tigers have now defeated Kentucky in four consecutive seasons for just the second time in program history. They also accomplished the feat between 1987-90.

Auburn will be aiming to complete a sweep of the Wildcats for the first time in program history. The Tigers are 2-49 in games at Kentucky all-time, winning 75-67 in 1983 and 53-52 in 1988 thanks to a game-winning 3-pointer by John Caylor. Auburn has lost its last 18 trips to Rupp Arena.

Under head coach Bruce Pearl, Auburn is 5-6 against Kentucky. The program’s five victories vs. the Wildcats since 2015 is second in the SEC trailing only Tennessee’s eight. Kentucky had won 16 straight and 30 of the last 31 games in the series prior to Pearl’s arrival to Auburn.


After a sluggish first half that saw the two teams combine for 46 points, the Tigers scored 45 in the second half – shooting 56 percent from the floor and 80 percent from the foul line – to secure a 66-59 victory over Kentucky inside Auburn Arena on Jan. 16.

Allen Flanigan led Auburn with what was a career-high 21 points and pulled down nine rebounds. Devan Cambridge scored 13 points, and Sharife Cooper added 11 points and a game-high eight assists in what was his just his third game at the college level. Defensively, the Tigers induced 18 Kentucky turnovers and scored 20 points off those turnovers.


Auburn’s do-it-all backcourt tandem of Sharife Cooper and Allen Flanigan have produced a combined seven games of at least 10 points, five rebounds and five assists this season. Cooper has achieved the criteria four times in 11 games, while Flanigan has done so three times, including twice over the team’s last four games.

Cooper’s four 10-5-5 games leads the SEC and is tied for 29th in the country, while Flanigan’s three such games is tied for second in the league with Herb Jones (Alabama), Dru Smith (Missouri), Jalen Tate (Arkansas) and Trendon Watford (LSU). Auburn is the only team in the country to have multiple underclassmen with at least three games of 10 points, five rebounds and five assists this season.