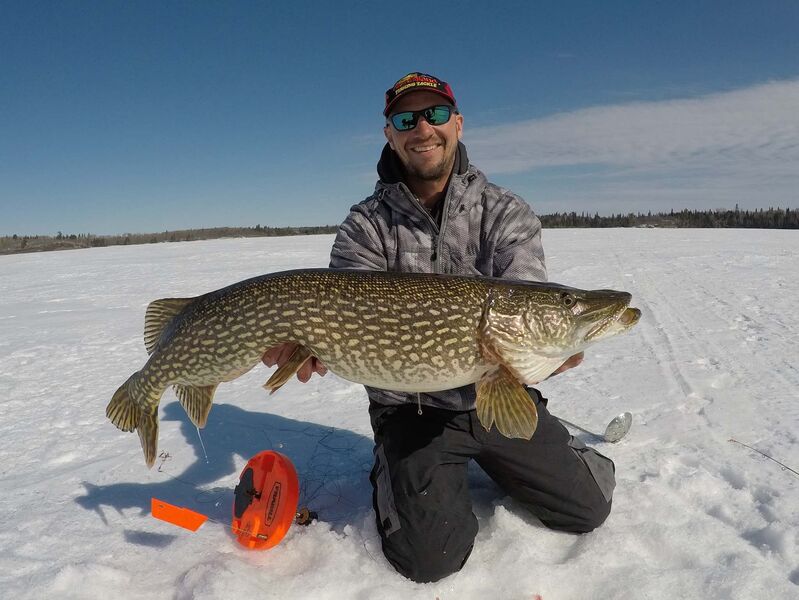 With a bit of a cold snap, fishing for many species has slowed down in this part of the word. One species that doesn’t get as much attention during the winter months is the mighty northern pike.

This year has been a good one for big fish, the second year in a row. Much of this can be attributed to the extended period of stable, mild weather. Fish activity level is affected by cold fronts, or extreme changes in temperatures. We have been fortunate this year in that regard. It does look like the rest of February will get substantially colder though.

Big pike love this kind of stability, roaming constantly in search of food. There have been two bodies of water of note, one Lake of the Prairies and the other, the north basin of Lake Winnipeg. Last year Phil Paczkowski of Roblin caught and released his personal best pike from Lake of the Prairies. It measured 119 centimetres (47 inches) and by using the weight conversion chart, weighed approximately 15 kilograms (33 pounds).

Paczkowski is a pike catching machine with many fish over the 100 centimetre mark to his credit. He likes to set his tip-ups on a big sand flat next to the main river channel. This area is about three metres in depth. He prefers that area, because when the fish are up on this flat, he believes they are actively looking for food. Roger Gere and his wife, Sue, have also been catching some big pike on that reservoir. Roger has been targeting two to five metres for the pike and about six metres for large perch. Fishing on the reservoir has slowed a bit in the last week.

Dave Shymr has spent years fine tuning his approach to catching big pike through the ice. When he goes fishing, he takes note of the barometric pressure, and moon phase as two key pieces of the puzzle. In periods of low pressure, he says pike tend to become inactive, moving to deeper water and staying in one spot. He doesn’t pack his gear and go home though, it simply means downsizing your baits and covering ground. He compares it to fishing for fussy, spread out perch or walleye.

Dave has his best success during the initial falling of pressure and a day after the rising of pressure from a normal state. When the pike are active, he will upsize his bait, which could be a 10-inch-long herring. He does carry a wide variety of dead bait and will change up often to see what is working. It helps to have two or three other anglers along so you can fine tune presentations a lot quicker.

Moon phase is also a key factor in the pike fishing world but does vary with the body of water to some degree. Dave will document every day on the ice, and he includes the following: moon phase, barometric pressure, temperature, wind, location, depth, presentation, size and kind of bait, and time of day.

One thing all hardcore pike fisherman agree on is that the use of tip-ups is the best way to catch them at this time of the year. Professional angler Jeff Gustafson (Gussy) loves to target them on his home waters of Lake of the Woods. He agrees that by far the best method is by using tip-ups and dead bait. He can’t believe more anglers don’t use them or even own one.

He prefers to use the Frabill Pro Thermal Round Tip-Up. While they have been around for years, he says they are great because they cover the hole. While they do provide some insulation to keep the hole from icing over as fast, they keep blowing snow and bright light from entering the hole, which he is a big fan of. Gussy uses a heavy line, usually 40-pound test, designed for fishing on tip-ups. It’s strong and does not tangle and you can easily handle it with gloves on.

For bait, frozen cisco is his favourite, which he catches through the ice while fishing other species Gussy says cisco are aggressive and like to eat small panfish-sized spoons so if you find them, they are easy to catch. When using dead bait, he recommends a quick strike rig, which has two treble hooks.

When rigging up the bait, put one treble in the head of the bait and one in the back, usually around the dorsal fin. Gussy lets the bait hit the bottom, then lifts it up about one metre above bottom, so it hangs horizontal. When a fish bites, he lets it run briefly, then sets the hook with a long sweep. With a quick strike setup and fairly quick hookset the fish will not swallow the bait too deeply, allowing for a quick, safe release.

Ice Fishing Derbies had been a huge part of Manitoba winters until the pandemic swept in. One enterprising company in the U.S developed an app that allows tournaments to proceed virtually. The Fish Donkey app has hosted over 4,000 virtual tournaments and derbies during the last year.

When Todd Berga, the manager of The Fishin’ Hole in Winnipeg was approached with the idea of holding a charitable event using this platform, he jumped at the chance.

Called The Full Tilt Winter Walleye Tournament this charity event will be in support of The Children’s Hospital of Manitoba. Berga says his store will donate $1,000 for the largest walleye caught by a male angler. Funk’s Toyota are sponsoring the female biggest walleye category and donated $1,000.00 for that prize. The tournament will run for 16 days from Feb. 20 to March 7. Berga says there will be daily prizes as well during the length of the event and entries are pouring in.

All you need to do is download the Fishdonkey app on your phone, then search for Full Tilt Winter Walleye. Adults can register for $50 and youth under the age of 16 for $25.

When using this app all you do is take a couple pictures of your catch and submit. If you are not sure how, there is a great video on the app that details how to do this. With many charitable donations down because of the pandemic, this is the future.