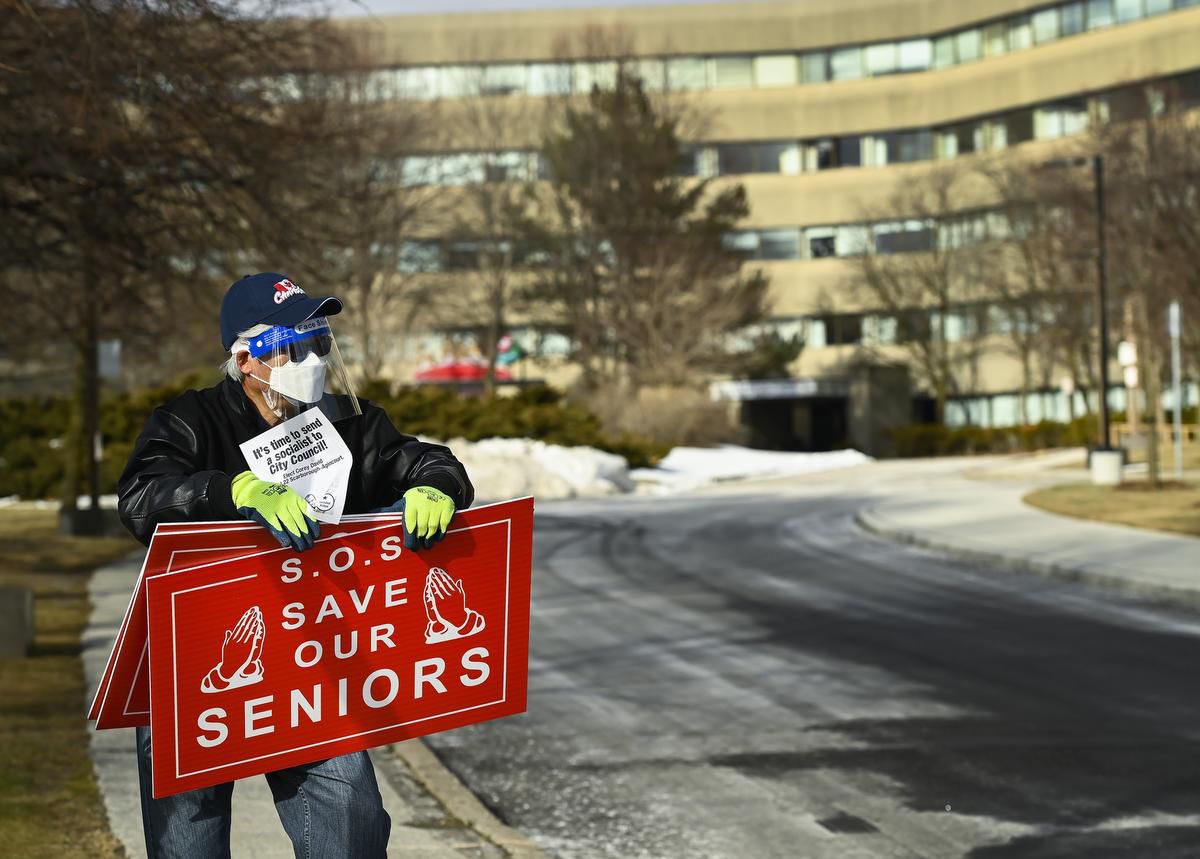 The latest coronavirus news from Canada and around the world Friday. This file will be updated throughout the day. Web links to longer stories if available.

4 p.m.: Alberta Premier Jason Kenney has ordered all cabinet ministers and senior government officials not to travel outside Canada unless it’s for government business.

He says he made an error by not issuing a clear directive earlier that they should not be abroad because of the COVID-19 pandemic.

He says any United Conservative government officials who were away during the holidays are now back in Canada or they are heading back.

Kenney adds that because they did not break any official rules and followed safe travel guidelines, they will not be sanctioned.

The Opposition NDP has called for the resignation of Municipal Affairs Minister Tracy Allard after it was revealed she took a vacation in Hawaii over the holidays.

Kenney says Allard left on Dec. 19 and continued to work while on holiday, but he only learned of her trip on Tuesday and he asked her to return.

He says she has apologized for her lack in judgement.

3 p.m.: Crowds are discouraged from gathering as people plunge into icy Canadian waters to ring in 2021, but the pandemic hasn’t frozen the charitable spirit behind the annual events.

Organizers of “polar swims” across the country are inviting people to participate in COVID-friendly dips with backyard adaptations or physically distanced events.

Keith Jolie said it’s disappointing that the usual crowd of more than 400 swimmers – and even more spectators – can’t gather on Toronto’s Sunnyside Beach this year.

Officials say the new cases were identified in the Fredericton region and involve one individual in their 60s and one in their 70s.

Both patients are currently self-isolating, and the source of their infections is under investigation by public health.

The province is also reporting four new recoveries — today’s active case count is 24, down from 28 reported a day earlier.

The latest diagnoses also come a day after the province announced the ninth death related to the virus.

New Brunswick reported Thursday an individual in their 40s died in the Moncton region as a result of “underlying complications” including COVID-19.

1:45 p.m. At least 52 residents of a Toronto long-term care home have died due to a COVID-19 outbreak at the facility.

Tendercare Living Centre says the outbreak has sickened 122 residents and 56 staff as of Thursday.

It says there are 78 active cases remaining in residents.

The Ontario government announced earlier this week that North York General Hospital would be taking over management of Tendercare.

The province says the arrangement will help address the outbreak and stabilize the situation.

Ontario will not release new COVID-19 data today but will have two days’ worth of updates on Saturday.

1:33 p.m. The number of confirmed U.S. coronavirus cases has surpassed 20 million, according to data from Johns Hopkins University.

That’s nearly twice as many as the No. 2 country, India, and nearly one-quarter of the more than 83 million cases globally.

The U.S. continued to surpass other countries in COVID-19 cases as it reached 20 million at the start of the new year, according to data kept by Johns Hopkins University.

COVID-19 deaths have also increased in the country, now totalling more than 346,000.

India and Brazil trail behind the U.S. in coronavirus cases at over 10 million and 7 million, respectively.

The increase comes as officials race to vaccinate millions of Americans but have come off to a slower and messier start.

President-elect Joe Biden criticized the Trump administration Tuesday for the pace of distributing COVID-19 vaccines and vowed to ramp up the current speed of vaccinations. However, Biden acknowledged that it “will still take months to have the majority of Americans vaccinated.”

12:45 p.m. An Oregon health care worker has been hospitalized after having a severe allergic reaction to the Moderna COVID-19 vaccine.

The Oregon Health Authority says the employee at Wallowa Memorial Hospital experienced anaphylaxis after receiving a first dose of the vaccine this week.

The health authority said vaccines for COVID-19 can cause mild to moderate side effects in some people. This can include pain and swelling on the arm and sometimes fever, chills, tiredness and headache. In rare cases, some people have experienced severe allergic reactions.

12 p.m. Italy added another 462 virus deaths on Friday for a known pandemic death toll of 74,621, the highest in Europe.

Italy’s daily death toll remains stubbornly high more than two months into restrictive measures and in the second week of a modified lockdown.

The number of new positives dipped by 5% from a day earlier, to 22,211, while 15% fewer tests were administered, according to Health Ministry statistics. Italy is launching its vaccine campaign and is first targeting residents of nursing homes and medical personnel.

11:13 a.m. Ravers at an underground, curfew-violating New Year’s Eve party that drew at least 2,500 people in western France attacked police units sent to shut them down, torching a vehicle and injuring officers with bottles and stones, officials said Friday.

Hundreds of vehicles carrying party-goers started converging on hangars in Lieuron, Brittany, on Thursday night, the regional government Friday said in a statement.

Gendarmes and their vehicles were attacked when they tried to stop the ravers from installing their party gear. Some officers suffered light injuries, the statement said. On Friday morning, 2,500 ravers from France and abroad were still partying, circled by a reinforced police presence.

9:36 a.m. The number of people in long-term care homes who have been sick with or have died of COVID-19 is devastating. Our journalists and columnists are committed to reporting stories aimed at accountability and change for the better. If you or someone you know has been affected by COVID-19 in a long-term care home — residents, support workers, staff and more — we want to hear your story. Please fill out this form.

8:30 a.m. Israel says it has vaccinated 1 million people against COVID-19, more than a tenth of its population, as it rolls out one of the world’s earliest and most rapid inoculation campaigns.

Prime Minister Benjamin Netanyahu was on hand when the millionth Israeli received a vaccination in the Arab town of Umm al-Fahm. Netanyahu called it a moment of “great excitement.”

Arabs make up around 20% of Israel’s population and have been slow to embrace the vaccination campaign. They have Israeli citizenship and the right to vote but face discrimination in housing and other areas, contributing to widespread mistrust of authorities.

Netanyahu said “it’s important for me that the Arab public in Israel will get vaccinated quickly,” because “it’s saving lives.” He delivered the same message at a vaccination centre in Tira, another Arab town, on New Year’s Eve.

After a year that saw Canada’s film exhibition industry roiled by the COVID-19 pandemic, industry observers say the country’s cinemas are sitting at a critical juncture with no clear path forward.

Most theatres across the country were dark over the usually bustling holiday movie season, as they were for the majority of the year in many major markets. The few screens that continued operating did so at a fraction of their usual capacity.

Some say sustained closures to prevent the spread of COVID-19 could spell doom for the movie theatre business, which has been battered in recent years as ticket sales declined and streaming giants like Netflix chased the same audience.

“There were enormous challenges to this industry long before COVID ever forced us into lockdown,” says Jason Gorber, a film critic based in Toronto.

“But it’s really easy to be cynical and think movie theatres are dead. I don’t think that’s the case at all… There’s a real opportunity for change and for theatres to actually come back, bigger and better in some ways.”

However, Gorber and other industry experts recognize a happy ending for Canada’s movie exhibitors is far from certain at this point.

They predict the road ahead for 2021 will be riddled with crucial developments, and potentially setbacks, that could set the trajectory for the future.

Among the most urgent questions is the speed of a nationwide vaccine rollout that could determine how quickly moviegoers return to theatres.

Several anticipated blockbusters are lined up for later this year, including much-delayed James Bond entry “No Time to Die,” in April and “Fast & Furious 9” in May. After a year of schedule reshuffles, none of those release dates seem certain, especially if lockdowns continue or moviegoers lack the confidence to return to theatres en masse.

7:20 a.m. Florida health authorities late Thursday reported finding evidence of the latest U.S. case of the new and apparently more contagious coronavirus strain first seen in England, saying it was detected in a man with no recent travel history.

The case, disclosed in a Florida Health Department statement tweeted on its HealthyFla site, comes after reports in recent days of two individual cases of the United Kingdom strain of Covid-19 discovered in Colorado and California.

Florida’s health statement said the new virus variant was detected in a man in his 20s in Martin County, which abuts the Atlantic Coast above densely populated South Florida. The health department did not give further details, such as releasing the man’s medical condition or how the strain was detected.

7:15 a.m. Tens of thousands of people were walking on the casino-lined Las Vegas Strip on New Year’s Eve by early evening despite a plea from Nevada Gov. Steve Sisolak that people reconsider their plans to go out and celebrate.

While shopping, gambling, drinking yard-long frozen cocktails and gawking at the sights, most everyone out in Sin City was wearing a face mask, though not all had them covering their mouth and nose, as recommended by health experts.

Casinos have abided by state rules by spacing out chairs at slot machines and installing acrylic partitions separating people standing around craps and blackjack tables, but inside the casino corridors that snake past the gambling floors there were many areas where there were too many people strolling through to abide by social distancing guidelines.

7:13 a.m. The Thai capital is shutting down venues including schools and entertainment parks as coronavirus cases continue to spread.

Seven provinces including Bangkok have been designated red zones where places including entertainment venues, boxing rings, gyms and flea markets are ordered closed. Restaurants are allowed to serve only takeouts.

The restrictions are in place until mid-January.

Friday 7 a.m. British medics warned Friday that hospitals around the country face a perilous few weeks amid surging new coronavirus infections that have been blamed on a new variant of the virus.

A day after the U.K. posted a record 55,892 new infections and another 964 coronavirus-related deaths, concerns are mounting about the impact on the overstretched National Health Service. Field hospitals that were constructed in the early days of the pandemic but that were subsequently mothballed are being reactivated.

The Royal College of Nursing’s England director, Mike Adams, told Sky News that the U.K. was in the “eye of the storm” and that it was “infuriating” to see people not following the social distancing guidance or wearing masks.

A leading physician also warned of burnout among health workers on the front line of the outbreak in hospitals, while also urging people to follow the rules.

Thursday 7:51 p.m.: A since-fired Wisconsin hospital worker was arrested for removing more than 500 doses of COVID-19 vaccine from refrigeration, causing them to spoil, police said Thursday.

A statement from police in Grafton, near Milwaukee, said the suspect was charged after “tampering with and causing the destruction of 57 vials containing approximately 570 doses of the novel coronavirus vaccine.”

The name of the person charged has not been released.

Advocate Aurora Health initially reported that 57 vials of the Moderna vaccine were tossed after an employee “inadvertently” removed them from the fridge at the Grafton center and left them out overnight. The employee, however, admitted to doing it deliberately, officials said.

The worker was fired Wednesday.

The vaccine must be stored in a freezer between minus 13 degrees and 5 degrees Fahrenheit, then thawed in a refrigerator for 21/2 hours or at room temperature for an hour.