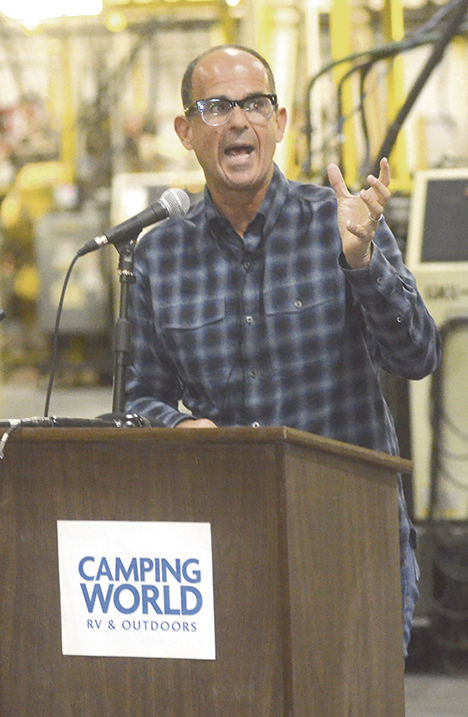 LORDSTOWN — Lordstown Motors Corp. is partnering with Camping World, the largest retailer of recreational vehicles in the U.S., to provide a coast-to-coast service network for the startup’s battery-powered truck, the Endurance.

Announced jointly Tuesday by CEO’s of both companies, the deal could blossom into the development of new electric vehicle products in the RV market, including the first Class E electric motorhome in the nation.

In addition, Camping World CEO Marcus Lemonis said his Lincolnshire, Ill.-based company plans to invest $4 million on charging infrastructure at the company’s more than 170 locations and will work with the more than 2,000 Good Sam parks to make the stations available there.

The charging and service infrastructure would be for all electric vehicles, Lemonis said.

The goal is to have a mock training environment ready by June to be prepared for when the first Endurance rolls of the production line later in 2021 so “we not only prepared to take the call, but we’re prepared to do the repair,” Lemonis said.

Said Burns, “Lordstown’s partnership with Camping World will help us help ensure that our fleet customers have the highest possible up-time of their vehicles.”

The deal could grow into bringing electrification of the RV industry, first, Lemonis said, with travel trailers and fifth wheels by working with Camping World’s manufacturers and eventually to the Class E motorhome based on the Endurance platform.

The platform includes a lithium-ion battery pack for travel trailers that would replace onboard gasoline generators.

He expects the first electric travel trailer and fifth-wheel electric prototypes sometime in 2021 with the first ready for sale with the 2022 model.

No. 1, however, is to make sure the service network can meet the needs of Endurance owners, he said. Happening at the same time will be development of battery technology for the RV market before putting the technology to use in the vehicles.

This is Camping World’s first venture into the electric space, but the company is more than $5 billion business that sells more than 100,000 units a year.

“A lot of times companies come to us because they know are infrastructure is different, and we’re not trying to be an auto dealer,” said Lemonis, whose parents are from Campbell. “What makes us a little different is our service infrastructure and our parts infrastructure deals with so many different types of vehicles from a trailer all the way up to a $300,000 bus that Steve felt that we understood the nuances and the individuality that’s needed to make it work.”

Burns said the battery pack and motor lines being tooled at the plant will add 1,500 more jobs to the workforce needed to make the Endurance.

“We’ve been hesitant on jobs numbers, but … the end goal is we’re going to have more people here than GM had in its heyday,” Burns said.

Lemonis added, “We can sell more than he can make, so we don’t have a job demand problem. We’re just going to have to good, quality people.”