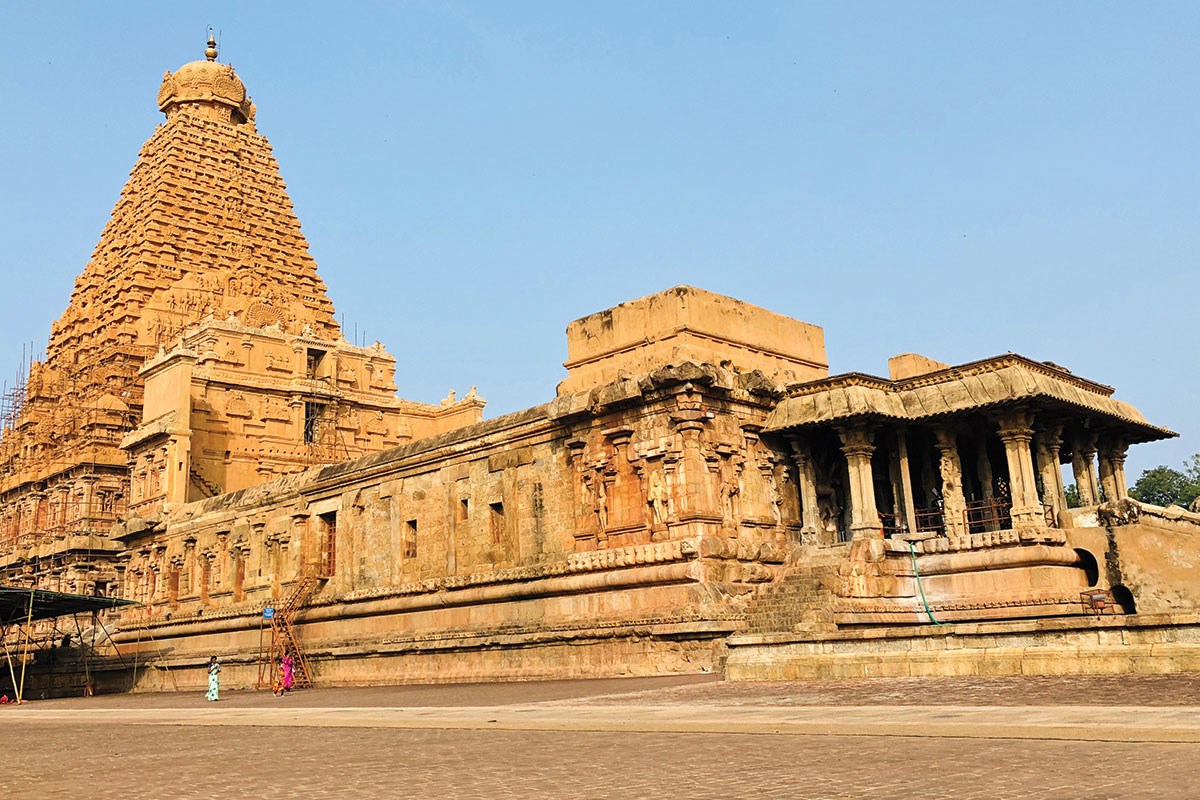 Read Part 1 in this series here, and Part 2 here.

Brihadisvara Temple (circa 1003 AD), in Thanjavur,was once the heart of the Chola dynasty. Travel buddy Astried Huebner and I spent a morning rambling through the well-preserved temple, catching a glimpse into a highly evolved culture. Once the mightiest rulers of southern India, the Chola presence was felt from Sri Lanka to northern India and parts of southeast Asia, until being annexed by the British in 1855.

Our pattern of driving aimlessly by intent along quiet rural roads on our motorcycles continued. Whenever we stopped, a small crowd formed, even in the most unlikely places. Watching a farmer work a rice paddy, a guy stopped to chat, as did the next five motorcycles. He had the advantage, being the only one who spoke English. Everything we said was theatrically translated. When he discovers I am Canadian, he smiles, shakes his head, and tells me his brother lives in Toronto. The crowd went wild.

Mid-afternoon attempts to find rooms in Musiri lead to dirty hotels. One angry man had the audacity to refuse us looking at the room without paying first. We laughed and circled town again.

Here, you eat in a “hotel” and sleep in a “lodge.” This can lead to hilarious confusion when you forget and ask directions to a hotel. A few businessmen emerged from a hotel—with a lodge above—and I asked them if they stayed here. One smiled and nodded that circular nod. “No chance, Sir. Go to Nammakal and stay at Golden Palace.” So, we did.

Later, near the centre of Nammakal, a young guy pulled alongside and asked where we were going. “Food,” I said. “Vegetarian or meat?” he asked. “Veg,” says I. “Follow me,” he said as he smiled and took off when the light turned green. He led us to an eatery, but we barely had a chance to shout “thank you” before he rode off into the dark streets. Amazing meal, again.

South of Nammakal, the arid hills of the Eastern Ghats meet the Western Ghats, which stretch from the southern tip of India north to Maharashtra State along the Arabian Sea. This is one of the world’s biodiversity hotspots and a UNESCO World Heritage Site.

Life is slow out here and foreigners on motorcycles are uncommon, so when we stop, the entire community emerges to stare. The ritual smiling, “hello,” and endless handshaking follow. Brave souls screw up the courage to try their English: Where are you from? Where are you going? They ask. They cannot resist staring at Astried’s blonde hair, blue eyes, and tattoos as though aliens have descended on their village.

On the outskirts of Karur, a man on a motorcycle riding in the opposite direction slowed to look at us. He turned around, following closely as we wound through the streets. At a chai stall, he approached and started asking questions, pulling out a notebook to write. I asked him why he was taking notes.

“I am a journalist for the Hindu-Tamil Times, sir. My name is Nur,” he said. “I have never seen a foreigner in this town, and I want to write a story in the newspaper about you. Do you have some time? I just called my photographer.”

We chatted with Nur, the photographer arrived, snapped some shots and they left. A crowd formed and a Mr. Salavan inserted himself, acting as translator. The crowd grew, traffic became snarled, and horns honked incessantly.

After a second chai, we bade farewell to our fans and climbed aboard the bikes. Squeals of “oooh” and “aaaah,” shouts of “goodbye” and frantic waving followed as Astried lead out. A handful of kids ran along beside us for a few blocks and we felt like celebrities.

Nearing the edge of town, we stopped to ask a couple of auto mechanics for directions. Each of the three men happily pointed in the same direction while asking for a “schelfie,” a universal term in India, and a common request.

More winding country roads eventually led to the small town of Aravakurichi where we found a room. After dinner, my phone rang and Nur told me to check page 5 of the newspaper next morning.

At the newsstand, I located the Hindu-Tamil Times, flipped it to page 5 and found Astried and myself smiling back. The shopkeeper couldn’t understand why a foreigner, who clearly did not speak the language, was buying a newspaper until I showed him page 5. He smiled and wagged his head in the circular nod.

Back at the lodge, the owner’s daughter and the others who had gathered round appeared suitably impressed. Our Warhol moment—15 minutes of fame.

For 28 days and more than 2,600 kilometres, Tim and his companion explored rural Tamil Nadu and Kerala (in 2017). Few foreigners ride the back roads of southern India and they certainly attracted a lot of attention. From chai-stall stares to schoolchildren’s cheers and even newspaper coverage. Read the first story here, and the second installment in the series here. For more on Tim’s adventures, go to timmorch.com.