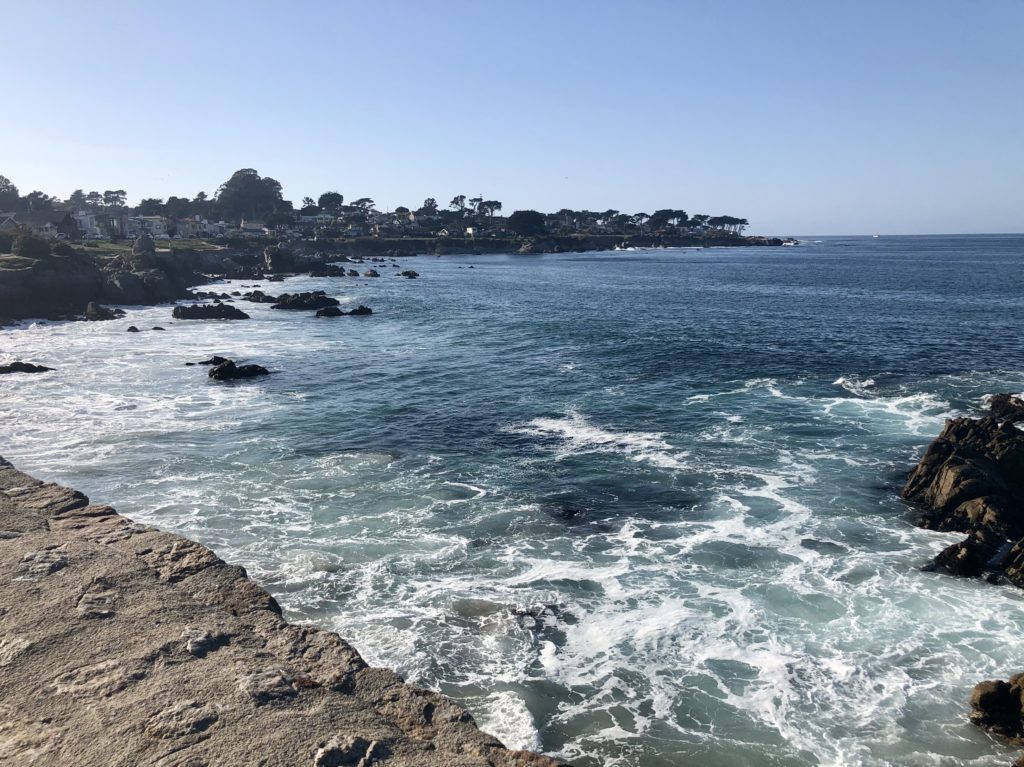 Last year, Alaska Airlines introduced a direct flight to Monterey, Calif. We have often visited that locale, particularly when our son attended Santa Clara University and then started to work nearby for Apple. (Now, he’s been working for Apple for a dozen years, far away in Cork City, Ireland, but that’s another story). Our prior routine was to fly to San Jose, say hi to him, then drive a rental car to a place just outside of Carmel. We were among the first to register for the new air service. Well, that new option didn’t come to be as we cancelled because of COVID-19.

One year later, after fortunately getting our two jabs plus two weeks’ wait, we took care of unfulfilled plans, feeling safe enough to undertake the 90-minute flight wearing double masks. But this trip, our final destination was changed. Long-term friends of ours had moved to Pacific Grove, and on our previous visit, they had given us a tour of the tiny, 4-square-mile town, which had opened our eyes to its beautiful (protected) water views — in a league with those of Point Lobos, 17 Mile Drive and Carmel Beach.

Equally intriguing was the extensive array of 100-year-plus Victorian homes and charming beach cottages. Most significant was the impression, soon to be confirmed on our stay, that while tourists were welcome, those targeted for enjoyment were the lucky inhabitants themselves. We stayed at an inn located in one of those Victorian manses, and we even chose to be four blocks from the water, on the main street. This gave us the pleasure of walking down different streets to the water, seeing scores of varied centenarian beach cottages, arrayed with art and with colorful fauna. Our inn practiced good caution, with breakfast brought to the room, no housekeeping entry, and no shared use of common areas. The many nearby good restaurants all had only outdoor dining. The usual (few) non-compliers on the beaches and waterside trail risked a $100 fine if not masked.

Pacific Grove had fairly unusual origins. Per Wikipedia, it was founded in 1875 , and named after Ocean Grove, N.J., with the land having been donated to a group of Methodists to establish a western version of a summer Chautauqua retreat. After gathering in tents for the summer, they would close things down and depart until the following year. These tent sites led to the many beach cottage sites. It also probably had a lot to do with the fact that it was the last dry town in California, ending only in 1969!

As with its neighboring town of Monterey, there was a lot of artistic involvement. John Steinbeck of “Cannery Row” fame actually resided in Pacific Grove. For that matter, the wonderful (presently closed) Monterey Aquarium is almost in Pacific Grove. This town of just 15,000 doesn’t need any attractions beyond its coastal promenade and its historic buildings. But it also is the site of a critical Monarch Butterfly sanctuary (migration season peaks in November), a famous conference center (Asilomar), a still-operating lighthouse (since 1855), a Stanford marine research center complete with dozens of basking harbor seals and — sadly– a plaque noting where singer John Denver’s airplane crashed into the sea.

While there are obviously many differences, Pacific Grove gives a similar feel to Edmonds in that it is principally aimed at being a nice place for its residents to live. Up here, we can’t match its warmer climes or rugged coast, but then Edmonds has the magnificent Olympic Mountains as a backdrop, ferries scooting by and resident eagles. Many do not realize that Carmel is officially “Carmel-By-The-Sea,” and I’ve jokingly given Edmonds a similar appellation, but I sure wouldn’t want our town to portray such a California attitude. I encourage you to get away to the more homespun Pacific Grove, but I don’t wish them undue population growth.

— Story and photos by Kevin O’Keeffe