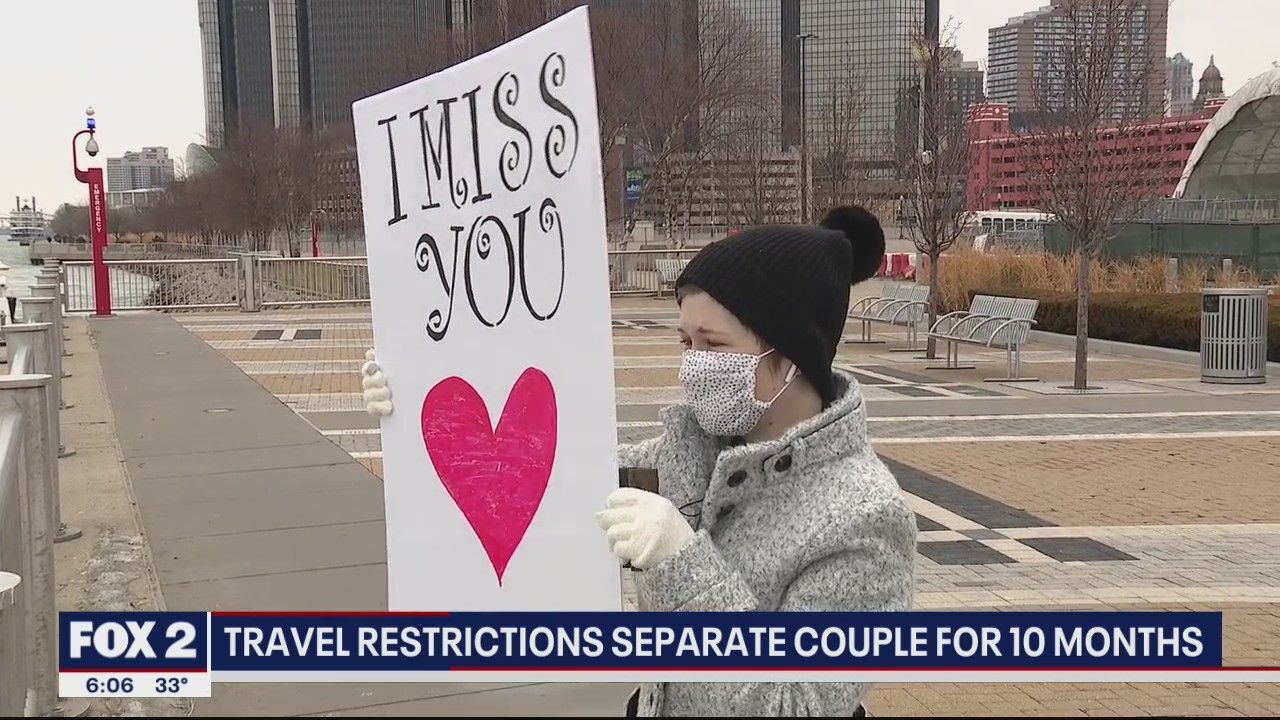 Travel restrictions for U.S. and Canada separates couple for 10 months

While Bake and Temple may not be able to stand next to one another, they’re doing everything they cna to still see each other. On New Years Day the two grabbed their binoculars and met on opposite sides of the Detroit River.

Nothing can stop the love Karissa Baker and her fiance Jacob Temple have for one another.

“He’s just the most gentle and kind person that I’ve ever met. Not just towards me but towards everybody,” Baker said.

For the last 10 months, the couple has been separated by the Detroit River all because of the Coronavirus.

“It’s a prolonged gut-wrenching heartache. It’s so difficult to be completely alone,” Temple said in a virtual interview.

Since March the land border between Canada and the United States has been closed to non-essential travel. With Temple living in Windsor and Baker in River Rouge, the couple is now in a long-distance relationship they didn’t sign up for.

With extensions every month, they feel like there’s no end in sight.

“We are told we’re just supposed to grin and bear it, do our part, and it’s been incredibly difficult watching the world move on while we are stuck without any options,” Temple said.

While the couple may not be able to stand next to one another they are doing everything they can to still see each other. On New Year’s day, the two grabbed their binoculars and met on opposite sides of the Detroit River.

“It just hits you when you look across and you can see each other and now that there are so many hurdles on the way,” Baker said.

The couple is far from alone.

“Right now, in our group which was strictly organized via Facebook, we have almost 1600 families impacted so if you take that and extrapolate it out there are thousands probably tens of thousands of families impacted. Devon Weber said, founder of Let Us Reunite.

Right now the advocacy group ‘Let Us Reunite’ is lobbying congress to work with the Department of Homeland Security to create family travel exemptions across the land border.

“We are not asking for open borders we understand that the coronavirus is obviously a serious illness but we also are asking that we are allowed to see our families,” Weber said.

Meanwhile, in this time of uncertainty, Baker and Temple are certain of one thing. Nothing will come between the love they have for one another. Not the Coronavirus or the Detroit River.

“We know we are going to stick it out until the end. I just know that when it’s all over when it’s all said and done with we will have our life together,” Baker said,

While airports are open Karissa and Jacob say it’s not feasible to pay for a flight then have to quarantine and miss work after their visit.

Fox 2 reached out to the Department of Homeland Security and is waiting to hear back.