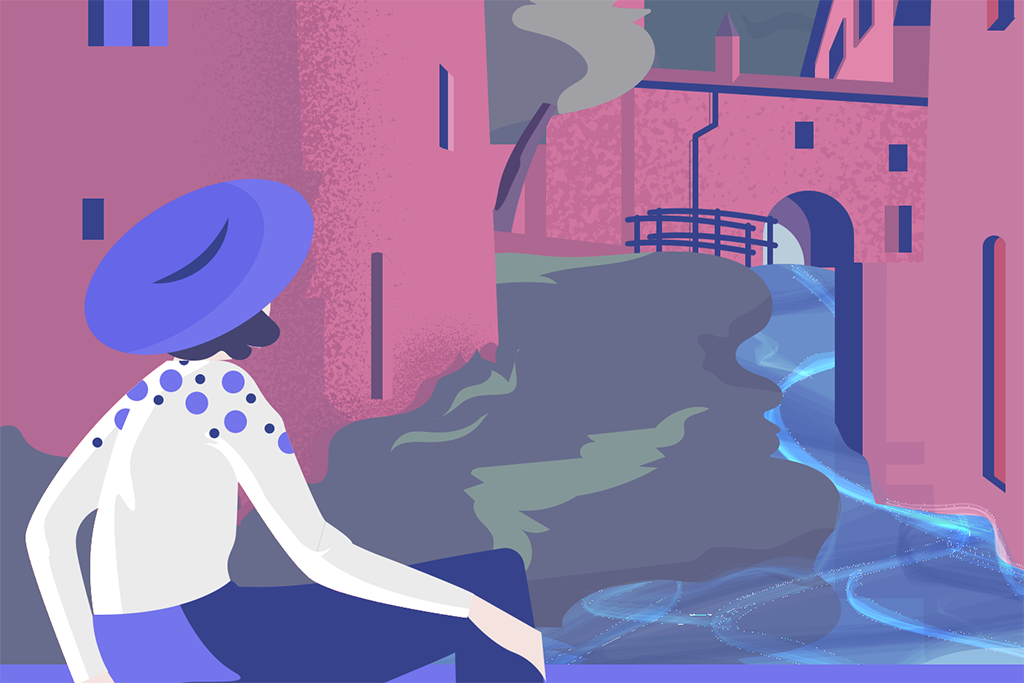 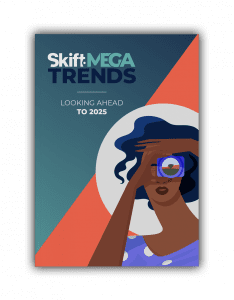 We recently released our annual travel industry trends forecast, Skift Megatrends 2025. Because of the havoc that the pandemic triggered, we wrote Travel Megatrends 2025 as a vision of how travel industry dynamics could play out five years from now. You can read about each of the trends on Skift, or download a copy here.

Battered by years of a stubborn pandemic, harsher hurricanes, more severe typhoons, sporadic wildfires, and escalating global temperatures that have melted glaciers, flooded coastal zones, and parched entire geographic expanses, the travel industry — and travelers — have been shocked into a new consciousness in 2025.

The oldest millennials are approaching 40 years old now, and have spawned the more globally spirited Generation Alpha. Millennials, along with their younger Generation Z counterparts, with the oldest among the latter group now in their late-20s, were renowned before Covid-19 as being price-conscious, experience-seeking, and destination-indecisive. Find them a deal and a potentially memorable experience, and boom — the vacation was on.

But in 2025, many members of these maturing generations have turned things around, and become destination-decisive.

That means that a growing segment of travelers — not everyone, for sure — is now mulling the relative impact their trips may have if they opt for Botswana instead of Barcelona, or choose to ride the rails closer to home instead of flying an Airbus A380 to a congested airport outside a teeming metropolis. This more-conscious decision was already happening among Millennial and Gen Z travelers years earlier as seen in the chart below.

The seeds of the change were already simmering in the midst of the pandemic in 2020. In a Booking.com global survey of travelers that summer, 60 percent of respondents said they would use an app or website that recommended itineraries where tours would have a positive impact on locals. At the same time, 51 percent claimed they would change their chosen travel destination and head instead to a less-popular one if that decision would have less of an adverse environmental impact.

As G Adventures founder Bruce Poon Tip described it five years ago in 2020 at a Skift conference, conscientiousness in personal decision-making is essential for changing the world, and diminishing any deleterious impact of travel.

Traveling Without Wrecking the Planet

“Asking questions” is important, Poon Tip advised. “Deciding between hotels, and between cruise ships. There are better ones, and between luxury hotels. Deciding between operators, I mean, finding out where your money is going because you have so much power when you decide to travel and spend money in another economy.”

All of this doesn’t mean making the travel experience less exciting, but it becomes in some instances a less flashy way of viewing and traveling the world — or your own region or country — with an emphasis on safety, sustainability, and profound experiences while getting from point A to B without wrecking the climate and local quality of life in the process.

A somewhat leaner and more consolidated travel industry, wracked by the coronavirus contagion and the extended period of economic dislocation and pain that ensued, in 2025 simultaneously influences and gets shaped by this Megatrend, which embodies a newly empowered destination-decisiveness and purposefulness. As part of this new decisiveness, visitors are embracing the slow travel movement, soaking in fewer attractions in their wanderings and getting more out of each. They’d rather make stops along the way, and take an unanticipated turn toward a small village that just came into view, instead of speeding 80 miles per hour along a highway to add another tourist magnet to their refrigerator collections.

Importance of Environmental Responsibility for Millennial and Gen Z Travelers

Overwrought destinations have increased limits on big-cruise ship arrivals, capped or banned Airbnb and other short-term rentals, and invested in marketing under-visited but enticing cities, towns and villages that aren’t tourism magnets. Lisbon incentivized short-term rental owners to rent their properties to the municipality to use for affordable housing instead of tourist stays, and more than a handful of major cities in 2025 have followed the Portuguese capital’s lead. That has helped tamp down real estate speculation in major urban centers, and quieted some of the neighborhood convulsions that came with the daily spasms of tourist arrivals and out-of-control house parties.

Some travel businesses and destinations have found a receptive audience among travelers eager to visit previously unheralded locations. Although voluntourism before the pandemic tended to be a niche affair, the incessant spikes of global climate calamities that put peoples and nations under duress, have spurred an intensified traveler desire in 2025 to depart a destination only after contributing to making it a better place rather leaving it as a mountain village or urban neighborhood more beaten down.

It didn’t take technological wizardry, but many online travel agencies and tour operators now offer bookers the option of dedicating a day or two of their trips to helping construct a local water purification system, plant trees along shorelines devastated by hurricanes, or immersing themselves in local languages and cultures.

However, the new world order in 2025 is certainly not a Utopian patchwork of tolerance and feel-good vibrations. Far from it. In many ways, a surge in hyper-nationalism, xenophobia and neo-fascism within some countries toward its own citizens, and outwardly toward refugees, foreigners, and other nations has rendered travel more splintered, and the globe more fragmented, turbulent, and disconnected.

Travel bubbles, or trip corridors, that some countries inaugurated in 2020, 2021, or 2022 out of pandemic concerns have morphed in 2025 into semi-permanent tunnels of intolerance, restricting admittance to the privileged, or to favored nationalities, ethnicities, and religions. Intermittent political tensions have turned regions and countries into “go” or “no-go-zones.” Visa restrictions have become so tight and onerous in some destinations that would-be international travelers don’t even bother to consider certain visits, and opt instead for less-exotic regional or domestic destinations, which have increased in popularity post-pandemic regardless.

All of this fragmentation has occurred despite the fact that the profile of the global middle class looks considerably different now in 2025 when compared with a half-decade earlier. Travelers’ relative buying power has shifted even further eastward toward China and India now, but Russia and Brazil played catch-up, as well. For example, gross domestic product per capita rose nearly nine times to roughly $25,300 in China over the five-year span, five-fold to $9,560 in India, and it would more than triple to $33,850 in Russia, as a Bloomberg analysis of the International Monetary Fund’s World Economic Outlook had pointed to. Brazil’s gross domestic product per capita doubled, but slightly trailed the comparable growth rate in per-capita GDP in the United States.

When China doesn’t ban certain travel destinations, such as it did with South Korea way back in 2017 in a dispute over stationing U.S. missile defense systems there, and when other countries don’t carry out similar prohibitions, the balance of power among the globe’s most popular travel destinations has shifted in 2025. The anti-foreigner rhetoric that blunted U.S. visitations during the Trump era has abated five years later because of the change of presidential administrations. Due to the increased spending power of the Chinese and Indian middle classes, in particular, their travelers have rewritten the global most-visited countries’ list based on their own most-favored nations.

Many observers have pointed out that innovation almost reflexively follows crises. The Roaring 20s in the United States followed the Spanish flu of 1918. Likewise, the Covid-19 pandemic of 2019 and 2020, with its extended lockdowns, dislocations, death and general feelings of malaise, not only gave way to an enhanced appreciation for family, friends, relationships, everyday normalcy, and the right to travel in 2025, but it also led to a period of innovation, just as the 1920s did with its wave of autos and automation.

Digital services from food delivery to the Alibaba and Amazon retail platforms, and work-from- anywhere freedoms, became ingrained in 2025, as did livestream marketing, an expanded assortment of virtual experiences, and self-driving cars on well-worn and less-complicated routes. A humbled global travel industry that was shorn of innumerable weaker companies, and battered during an era of Covid-19 and overlapping and intensifying climate calamities, seized opportunities to fill market gaps, and got more imaginative and creative about new ways to capture the 2025 loyalties of the new self-directed traveler. Yes, many travelers in 2025 seek a more intimate, meaningful, and soulful trip experience.

Counterpoint: On the other hand, despite the post-coronavirus hangover and climate change imperatives, many argue that major travel brands, whether it be Trip.com Group in China, Accor in Europe, Delta Air Lines in the United States, or Emirates in Dubai, are still overwhelmingly concerned in 2025 with profits, the stock market valuations in the case of public companies, and meeting analysts’ and shareholders’ quarterly expectations..

The bottom line is still the bottom line, and nothing is more important to corporations than profit and the prospect of unrelenting growth. Sure, many airlines want to transition to cleaner fuels, but that will take additional years. So despite the incessant heat of climate change, American Airlines, Ryanair, Tam and Ethiopia airlines don’t turn away passengers in the name of a smaller carbon footprint. Booking.com doesn’t limit the number of tourists it sends to headquarters city Amsterdam just because locals are fed up with overtourism.

Tripadvisor CEO Steve Kaufer was correct in 2020 when he predicted that the future of travel would more closely resemble its past profile than be subject to a complete makeover. The traveler of 2020 is not experiencing much culture shock when experiencing the travel habits of 2025.

“In terms of — at the biggest macro level from a traveler perspective, how do I think things are going to change in travel in a two-, three -year time frame?,” Kaufer said in 2020 in a call with financial analysts. “I got to say not much. People love to travel. It’s more and more of the younger generation who is growing up, looking for experiences in travel, always rate super highly on what people want to do. So the demand, I believe, will be there.”

In other words, in 2025, despite the fact that the short-term rental recovery eclipsed that of the traditional hotel industry coming out of the pandemic, hotels are back — although somewhat transformed. The growth of business travel has slowed, and hotels that formerly dedicated themselves to road warriors have tilted toward vacationers, but make no mistake that hotels are back.

Coronavirus vaccines not only turned back a deadly virus, but they also seemed to have erased many travelers’ memories in 2025 about the days five years earlier when they were fearful of flying alongside a potentially contagious seatmate, or the years when they refused to enter packed hotel elevators.

In 2020, Expedia Group CEO Peter Kern scoffed at the notion that residents and travelers would abandon big cities because of coronavirus, and in 2025 we can say he spoke the truth.. Kern said Expedia hadn’t found anything to indicate “there’s a long-term behavioral change” that would grow out of Covid-19. He recalled that after 9/11, pundits predicted that travel would change “forever,” and New Yorkers would abandon New York City in droves, but that never materialized.

“I am not one to believe that anything about what we’re going through will be permanent,” Kern said.

At the same time, while local drive vacations as an alternative to long-haul flights, and trips to more isolated destinations and properties where travelers could exert more sanitary controls surged during the 2020 coronavirus outbreak, the hotel industry and mass tourism picked up where they left off by 2025.

Barcelona is as crowded with travelers as ever although wildfires in Napa Valley, California meant tourism never recovered there. Mass tourism, though, tends to have a very short memory.