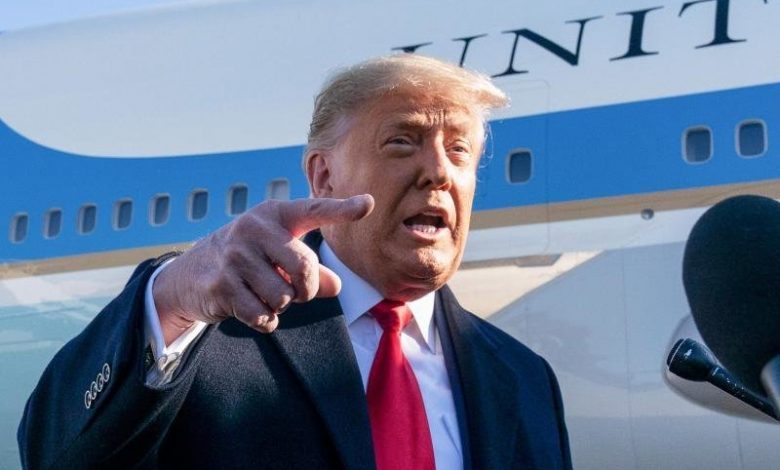 Washington (AP) – Outgoing US President Donald Trump has ended the entry ban for foreigners from large parts of Europe – but the future administration of his successor Joe Biden is unwilling to enforce the order.

A Trump statement circulated by the White House said restrictions on travelers from the Schengen area, Great Britain and Ireland and Brazil would be lifted on Jan. 26. Trump pointed out that from that date all international flights to the US would require proof of a negative corona test before departure.

Trump’s term of office ends on Wednesday with Biden’s swearing-in. Trump’s measure wouldn’t go into effect until six days later. “On the advice of our medical team, the government does not intend to cancel on Jan. Future White House spokeswoman Jen Psaki said on Twitter, “As the pandemic gets worse and more contagious variants appear around the world, now is not the time to lift restrictions on international travel.” Instead, the Biden government is planning further measures regarding international travel to stem the spread of the virus.

Biden has made the fight against the coronavirus one of his main direct goals. The pandemic continues to get out of control in the US. Since the first case became known about a year ago, more than 24 million coronavirus infections have been detected in the US, according to statistics from Johns Hopkins University. About 400,000 people died after infection.

Trump had imposed the entry ban on foreigners in mid-March due to the rapid spread of the coronavirus in several European countries. Currently, travelers from the Schengen area, Great Britain and Ireland are not allowed to enter the US with a few exceptions. Trump had also issued strict entry bans for foreigners from China and Iran – these should remain in effect after his new order. Trump recently introduced extensive entry restrictions on people from Brazil. Travel across the US border to neighboring Canada to the north and Mexico to the south has also been limited due to the pandemic.

The US health authority CDC announced last week that a negative corona test for flights to the US will be mandatory starting January 26. The rule applies to all international flights to the US, regardless of the place of departure and the citizenship or visa of the travelers.

The warrant also applies to Americans exempt from Trump’s entry bans. If a passenger cannot prove a negative test result or a surviving Covid infection, “the airline must deny boarding,” the report said. The so-called PCR test, which is to detect the virus, must therefore be performed in the three days before departure.

The health authority is also urging all travelers to retest three to five days after arriving in the United States and to stay home seven days after the trip. However, these are recommendations, not a legally binding rule. CDC boss Robert Redfield admitted when the measure was announced, “Tests don’t eliminate all risk.” When combined with the other precautions, travel becomes safer.

Given the new and probably more contagious variant of the coronavirus, which has so far spread mainly in Britain, the US has been demanding a negative corona test on entry since the end of December – which is possible for foreigners with a special permit. Individual cases of the new variant have already been discovered in many US states.

There are also restrictions on people from the US and other risk areas if they want to enter the EU. They are only allowed in “if they have an important function or if their travel is absolutely necessary,” as the federal Department of the Interior announced.