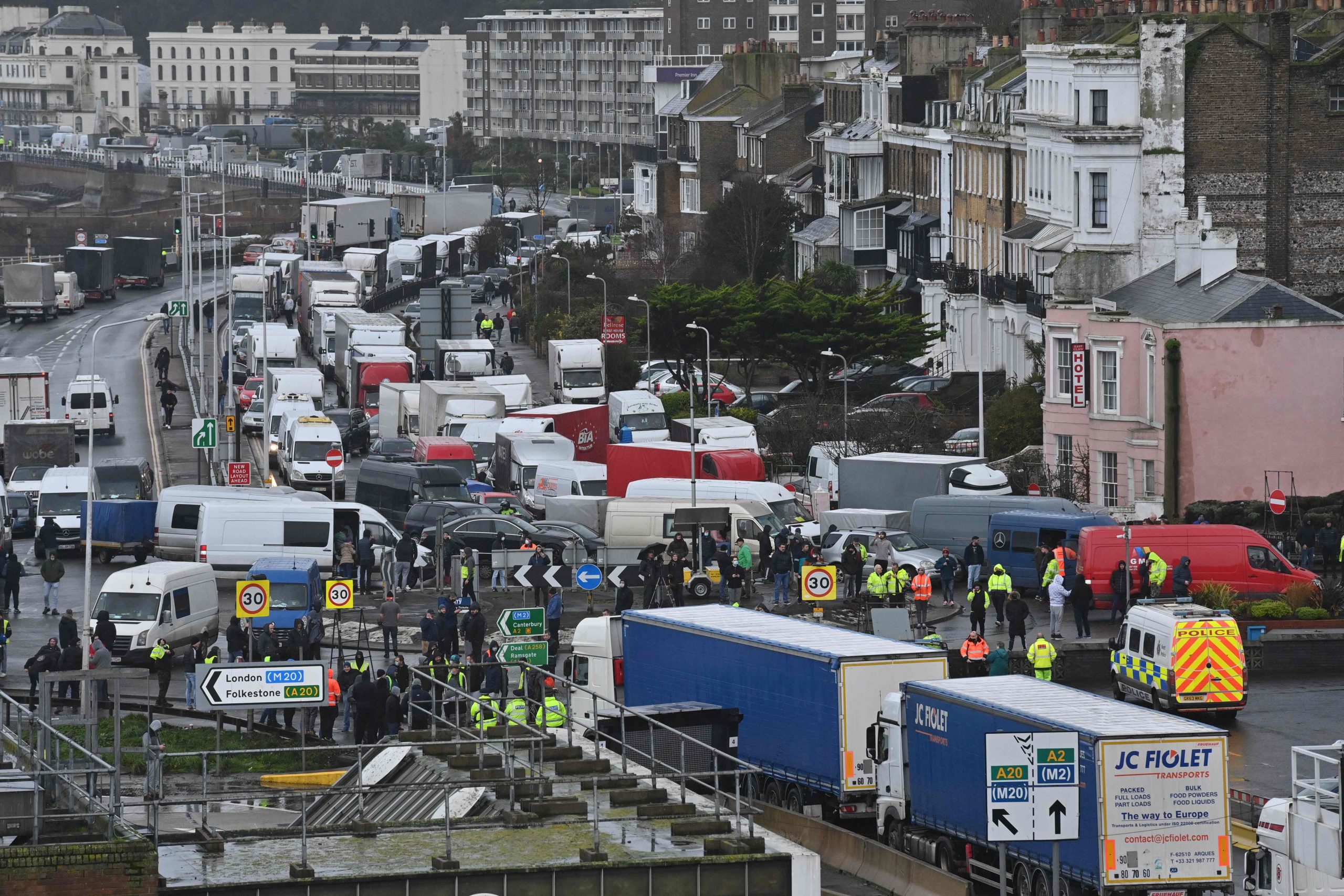 Hauliers are being urged to avoid Kent despite the reopening of the French border, as protesting lorry drivers closed a road and clashed with police after tempers flared over delays in crossing the Channel just two days before Christmas.

The first passengers arrived in France from the UK in the early hours of Wednesday as part of a deal to restore travel between the two countries after a wave of bans left travellers stranded and supply lines severed.

A mass testing programme for lorry drivers is now underway but Grant Shapps, the transport secretary, said there continued to be “severe delays”.

Kent Council leader Roger Gough said the first 20 trucks, of more than 5,000 HGVs being held in the county, have now entered the Eurotunnel to make the crossing to France.

Mr Gough said tensions between police and drivers had calmed down but added the situation remained “quite fragile”.

He said 100 lorries had left the Manston site for Dover but had been unable to get to the port as it was being blocked by other vehicles.

“On the M20 side of things, the first 20 HGVs have gone into Eurotunnel,” Mr Gough told Sky News, adding that the number should begin to “pick up” rapidly.

Italy has reopened air travel from the UK, according to the Italian embassy in London.

Travellers must have a negative Covid test, be a resident of Italy and self-isolate for 14 days upon arrival in Italy.

The boss of Britain’s busiest airport says the latest round of travel bans has “effectively stopped” international travel.

In a letter to the prime minister, Heathrow Airport chief executive John Holland-Kaye has demanded the unilateral introduction of a testing regime, with a PCR test 72 hours before departure and an additional rapid Lamp or antigen test at the airport.

Sam Cabral, a French expatriate living in Britain, expressed relief today as she stepped off a Eurostar train from London, becoming one of the first people to make the trip after a travel ban imposed over Covid-19 worries was eased.

“I’m very happy to be home and actually I’m going to … go and see my mum and dad, put on a mask and give them a hug,” she said on arrival at the Gare du Nord station in Paris.

Another French expatriate arriving in Paris today, Albert Khayat, described the scramble to try to comply with the new rules.

“I was trying to get out of London,” he said. “We got the news at 7pm [on Tuesday].” He said he was advised to get tested at the train station in London, which he did this morning before boarding.

“The scandal is … tests in Britain cost £160 pounds for each test,” said Mr Khayat. “Not everyone has that luxury.”

Another lorry driver led away by police after Dover scuffle

Tensions have begun to flare once more between a group of hauliers and police at the Port of Dover, with one lorry driver led away by officers following a scuffle.

Anyone returning to Northern Ireland for the festive season should be self-isolating on Christmas Day under the terms of guidance issued by Stormont.

The advice, published by the executive, comes after ministers agreed earlier this week to recommend against any non-essential travel between Northern Ireland and both Great Britain and the Irish Republic.

The executive also agreed to advice that anyone arriving in Northern Ireland, who is staying for more than 24 hours, must isolate for 10 days. It applies to anyone who has arrived since 22 December.

People who intend to leave the region before 10 days elapse can do so.

New York City’s mayor, Bill de Blasio, has said people arriving from the UK must now quarantine, with officers to conduct door knocks on homes and hotels to ensure travellers are complying with the new rule.

“This will be a personal and direct order to every single one of them telling them they must quarantine,” the mayor said. “People are going to be held responsible.”

Travellers will face a $1,000 fine for each day they flout the rules, NBC New York reported.

News that another new coronavirus variant – this one linked to South Africa – has been found in the UK has led to fresh travel restrictions on the country.

What is thought to be coronavirus testing facilities have arrived at the Port of Dover, the PA news agency reports.

Escorted by police, a number of vehicles drove into the eastern docks car park, with drivers wearing jackets with NHS Test and Trace branding.

Among the convoy was a coach carrying P&O Ferries staff.

Two cases of another new strain of Covid-19 linked to South Africa have been identified in the UK, Matt Hancock said.

The health secretary said both cases and close contacts of the cases have been quarantined, there are immediate restrictions on travel from South Africa and the government is telling those who have been in contact with anyone who has been in South Africa in the last fortnight that they must quarantine.

He added: “These measures are temporary while we investigate further this new strain which is shortly to be analysed at Porton Down.”