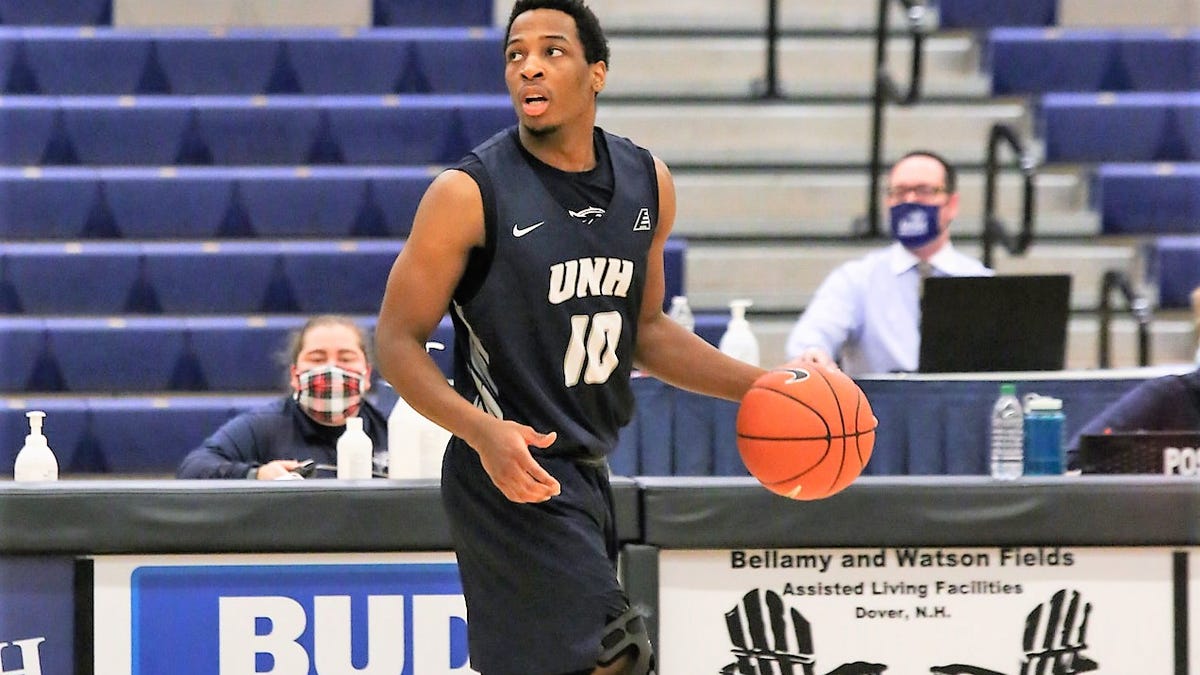 By Brandon Brown
|  The Portsmouth Herald

The University of New Hampshire men’s basketball team split a two-game series with the University of Albany this past weekend to stay above .500 in the America East Conference.

The two games were polar opposites of each other. The Wildcats handled business on Saturday with a 71-64 victory. On Sunday, it was all Albany. The Great Danes bounced back with an 83-64 win.

In the seven-point victory on Saturday, the Wildcats were led by a pair of Nicks. Nick Guadarrama posted a game-high 25 points, connecting on five of his eight 3-point attempts. The junior forward added seven rebounds and three assists. Nick Johnson was spectacular as well, recording a career-high 18 points and 10 rebounds, his first double-double of the season.

“Everything we do on offense really goes through (Guadarrama),” Herrion said. “He’s a very unselfish guy, he’s drawing a lot of defensive attention. And he’s really willing to pass the ball and get other people shots.”

Guadarrama is also a knockdown 3-point marksman, shooting 39 percent from beyond the arc this season.

“He made five 3s in Saturday’s game, so when he steps away, he’s getting some space, and he’s shooting it well, which is great,” Herrion said.

As for Johnson, Herrion said, “Nick Johnson, I think right in front of our eyes, is really starting to emerge. I think he can be a terrific player.”

Johnson, a redshirt freshman, missed all of last season due to a torn ACL.

UNH led 35-22 at the half, but the Great Danes cut the lead to two points three times in the second half, the last time at 2:14 to make it 61-59. Johnson’s three-point and a trey by Guadarrama gave the ‘Cats some breathing room, 67-59, as they were able to hold on for the win.

Sunday’s loss had a different plot to it. The Wildcats committed 15 turnovers, which is the second most the team has committed this season.

The game wasn’t all that close as the Danes led by 24 points on multiple occasions during the first half, before going to intermission up 45-26. The second half was more of the same, including seeing Albany lead by as many as 26 points.

In addition, the free-throw discrepancy was huge. Albany connected on 22 of 30 attempts compared to just five of seven for UNH.

Herrion credited the play of Albany on Sunday. He said, “I think we backed them into a corner on Saturday. They came out with way more urgency, toughness than we did on Sunday and we did not respond, and we got beat badly.”

Albany shot 52-percent from the field and had five players score in double figures, led by C.J Kelly with 23 points.

Marque Maultsby and Blondeau Tchoukuiengo each scored 14 points for UNH during Sunday’s defeat.

Up next for New Hampshire is a weekend road series at Binghamton (1-12, 1-9 AE) — a good chance to improve on their conference record against the league’s last-place team.

Binghamton traditionally plays a zone defense, a defense that the Wildcats haven’t seen much of this season.

“We took (Monday) off, we came back in the gym today, we started working on zone offense,” Herrion said.

Both Saturday and Sunday’s game at Binghamton are scheduled for 2 p.m. tip-offs.