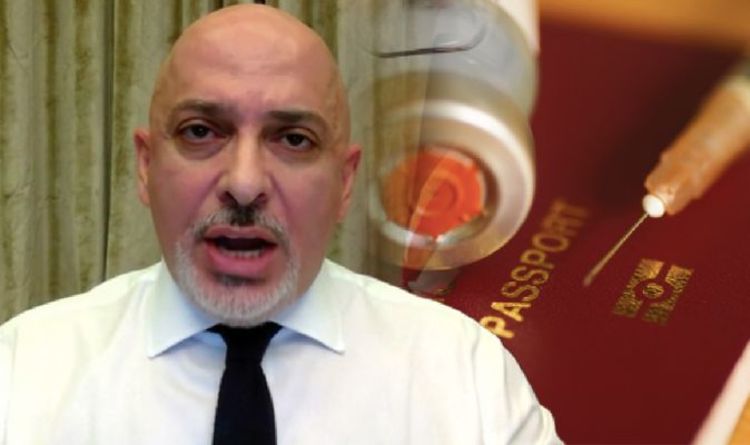 The UK Government has “no plans” to introduced mandatory vaccine passports for travel, according to vaccine minister Nadhim Zahawi. Speaking on Sunday’s Andrew Marr show, the minister said forcing residents to carry proof of inoculation is “not how we do things in the UK.”

Vaccine passports have been cited by some airlines and countries as the key to opening up international travel.

In Greece, it has been suggested tourists who have proof of vaccination will be able to reenter the country for holidays in the future.

At a European Council meeting in January, the Greek Prime Minister brought up the suggestion of health passports, which led to a Council update.

In a press release on January 21, the European Council said: “Leaders agreed to work on a standardised and interoperable form of proof of vaccination for medical purposes.

However, the UK’s vaccine minister has denied reports of the UK following suit with the development of a vaccine passport.

When asked about the prospect of a vaccine passport “allowing people to come and go in the months ahead”, Mr Zahawi said the Government “are not” considering any such plans.

“There are several reasons why we’re not doing that,” he said.

“One, vaccines are not mandated in this country, as Boris Johnson has quite rightly reminded parliament that’s not how we do things in the UK, we do them by consent.

“We yet don’t know what the impact of the vaccine on transmission is and it would be discriminatory.”

However, with some countries considering proof of vaccination in order to facilitate entry, Mr Zahawi said there would be ways for Britons to access proof of inoculation if necessary.

He continued: “Of course, you have the evidence that you have been vaccinated held by your GP.

“If other countries require you to show proof of that evidence then that is obviously up to those countries, but we have vaccinated over 11.5 million people and we have no plans for introducing a vaccine passport.”

According to the latest NHS data available, in the week ending January 31, an additional 2,307,976 people were reported to have received an NHS vaccination for COVID-19 in England.

Mr Zahawi’s comments have been applauded by travel expert Paul Charles, who said vaccine passports could bring about a number of “questions.”

“So many questions arise – who would pay for them? How do you stop fraud? How do you create global consistency? They would be another unwelcome barrier to getting global travel moving again.”