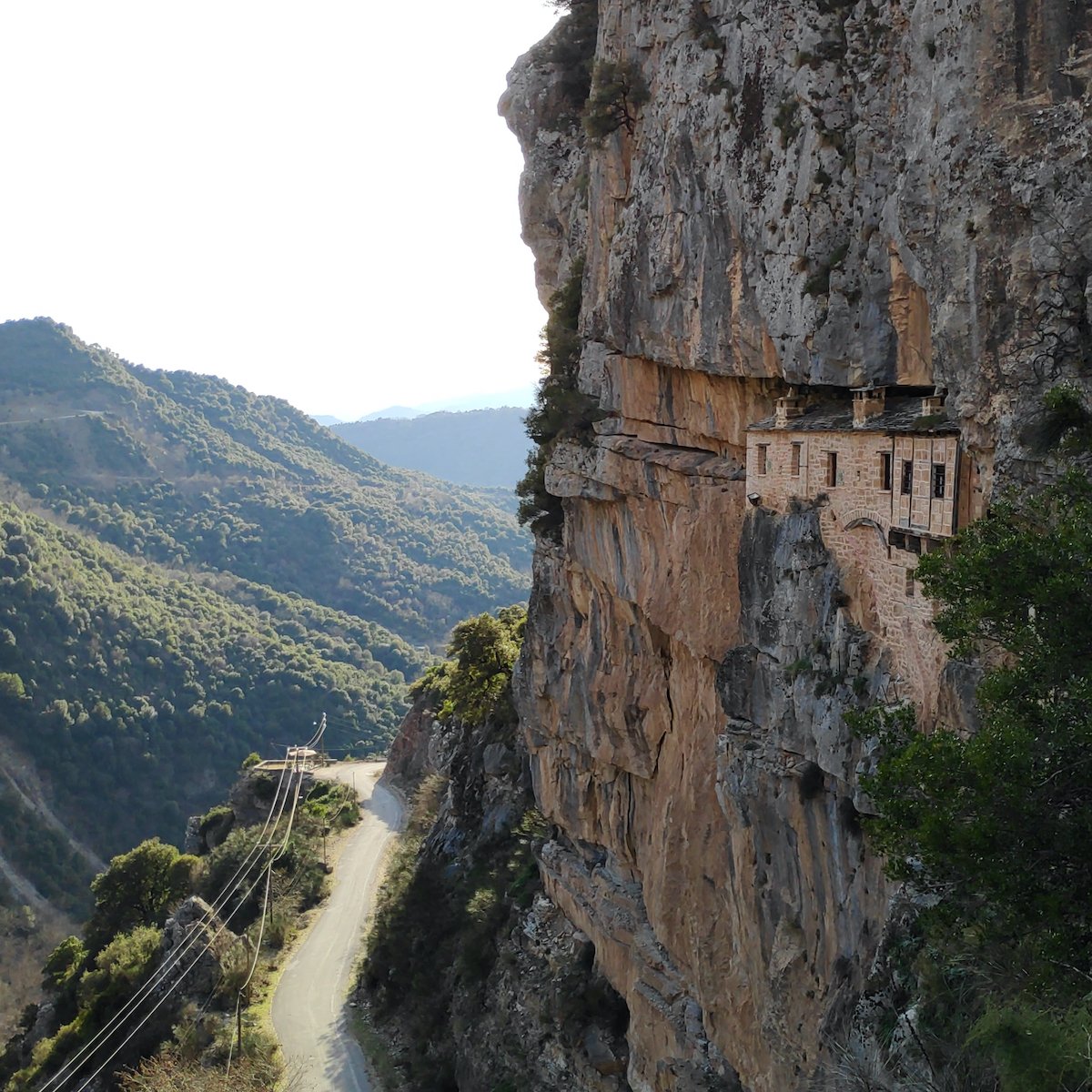 One can’t help but wonder how the Holy Kipinas Monastery, which was chiseled out of a mountainside in the 13th century, came to be. The location is both awe-inspiring and spiritual in nature, providing exquisite solitude seemingly made for meditation and reflection.

The History Of Holy Kipinas Monastery

Holy Kipinas is located in the mountains above the gorge of the Kalarrytikos River in North Tzoumerka, a part of the Epirus region of northwestern Greece. The nearest village is Kalarrites, and the nearest city is Ioannina.

Built in 1212 from materials taken from the surrounding mountains, it was the work of a group of monks who set out from the nearby Vyliza Monastery to establish a new order after a disagreement with their abbot. In search of a place to build a monastery, they came upon a hole in the mountain. The hole turned out to be a cave. But there was a big obstacle to reaching the entrance of the cave — it was separated from the mountainside by a deep ravine. The monks were undeterred, and they bridged the gap with heavy sticks. They dedicated their new home to the Virgin Mary.

When the monastery was first built, armed raids were a real threat. Greek Orthodox monasteries were targeted because of the golden icons and other treasures kept in their chapels. But the feisty monks of Holy Kipinas would have none of that. They built high walls to protect their mountain refuge, as well as a solid wooden bridge on rollers that could be retracted during an attack. Gone were the sticks that had first helped them to cross the ravine.

The fortress-like structure was put to good use when, years later, another danger materialized. From the 14th to the 19th century, the Ottoman Empire occupied Greece and persecuted the original inhabitants. Holy Kipinas served as a refuge and a secret school for the Greeks. Later still, during the Greek Revolution (1821–1832), when Greece fought for independence from the Ottomans, the monastery functioned as a hidden arsenal.

Since 1920, no monks have lived at the monastery. The structure now serves as a museum.

It is not easy to get to the monastery on your own. You might prefer to book a tour that will take in even more marvelous sights along the route. The duration of this tour is about 8 hours, and you can arrange pickup from your hotel.

If you’d like to make the trip on your own — perhaps driving from Athens — you’ll need to head to the coffee shop in the village of Kallarites to get the keys. Otherwise, you won’t be able to see the fascinating interior of the monastery.

You’ll enter through a low door after you have made the climb from the village through woods and over rocks. Your efforts will be rewarded with gorgeous views straight down to the Kalarrytikos River.

The interior of the monastery is larger than you might think. The chapel has a vaulted dome decorated with frescoes dating to the 17th century. The colors of the iconostasis are as vibrant as if they had been painted yesterday. The reception hall and dining room feature original furniture and beautiful tapestries. There is also a library with documents related to the history and founding of the monastery. The monks’ cells are located on two levels. Each features small windows looking out on the river below.

At the back is a thick wooden door, which the key you obtained in the coffee shop will open. Behind it is the real secret of Holy Kipinas: the cave. It stretches 787 feet into the rock; that’s why it was such an ideal hiding place. The cave is dotted with stalagmites and stalactites and is quite cool and humid.

A trip to Holy Kipinas is an adventure for the fit and sure-footed. The climb up to the entrance is not easy. Wear long sleeves and pants so you don’t get scratched on the way up and aren’t cold inside the cave. Bring water, too, since there are no facilities at the monastery.