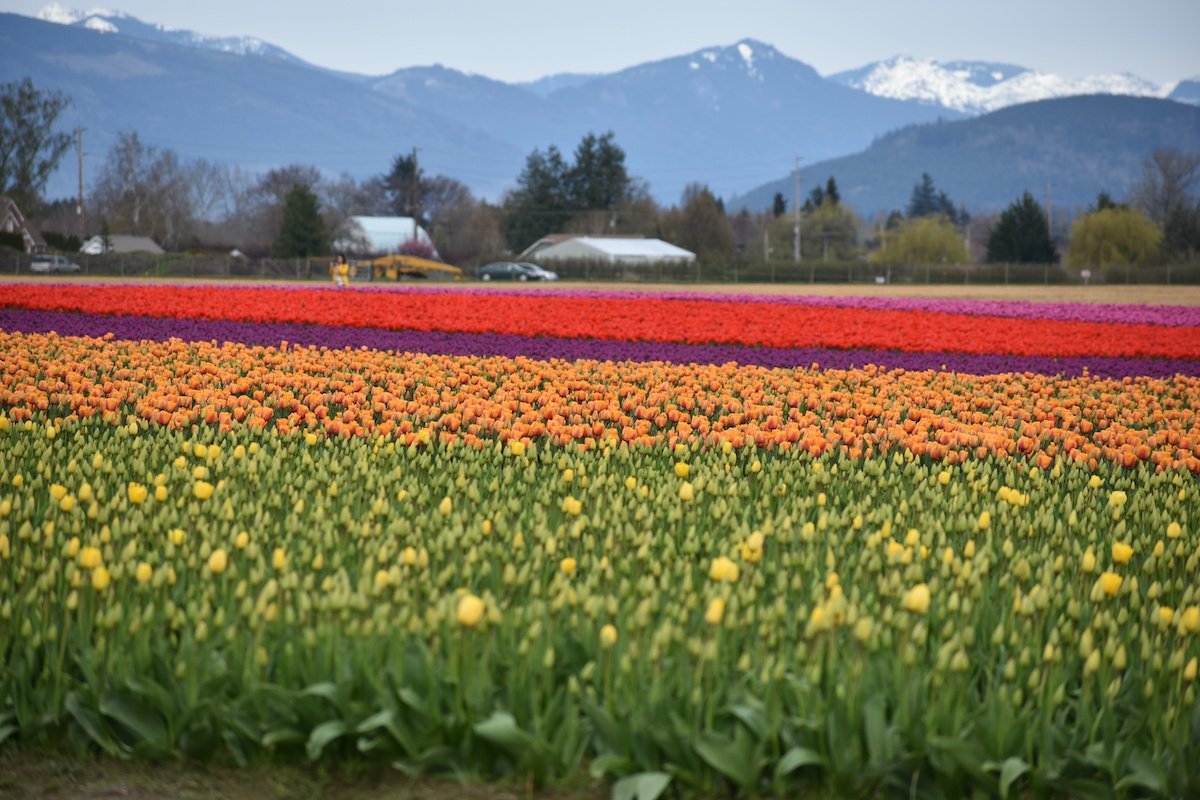 On February 16, 2021, the Federal Highway Administration announced 34 new National Scenic Byways. Washington’s Cascade Loop Washington’s Ultimate Road Trip received the new designation. It recognizes byways with notable scenic, historic, cultural, natural, recreational, and archaeological qualities (from the announcement). The Cascade Loop has all these attributes on a journey that will take you through mountain passes, scenic valleys, charming small towns, and crystal clear mountain lakes before heading through rich agricultural lands. The trip finishes up on the coastal islands you can reach by bridges. It is an epic adventure and one you will never forget.

You can pick this loop up at any point, but the recommended drive is to traverse the Cascades from the east heading west when going through Cascades National Park. One section of the road on Highway 20 is closed in the winter and should open mid to late May. You can do most of this trip without that section, but you won’t be able to do it as a loop.

Pro Tip: If you fly Alaska Airlines from any of the western hub cities you can land in Everett rather than Seattle. You avoid the Seattle traffic and are at the starting point for this trip.

Everett is an urban city and the home of Boeing. The city sits on Port Gardner Bay, with the second-largest marina on the West Coast. The waterfront is a vibrant area to explore but what draws people here is aviation. The Paine Field Aviation District has five world-class aviation attractions. Flight wasn’t invented here, but it was perfected here. Learn about the early days of flight and the most advanced technology on your visit here. The Future of Flight Aviation Center and Boeing Tour is a must-see. The factory building is one of the largest in the world. This is a one-of-a-kind tour and one of the most interesting I have ever been on.

This darling town is on the National Registry of Historic Places with beautiful Victorian and Arts & Crafts style homes. The downtown area is populated with historic architecture, many of which house the more than 350 antique dealers that make this the “Antique Capital of the Northwest.” Spend a few hours exploring the shops and have lunch at Todo’s Mexican Restaurant with its fun atmosphere and great food. Make sure to sit on the deck which overlooks the Snohomish River.

From Snohomish, you will head out of town on Highway 2 to what is known as the Stevens Pass Greenway to the top of Stevens Pass at 4,061 feet. This is your first pass over the Cascade Mountains. The charming towns of Sultan and Skykomish are on the route and worth a quick stop.

Plan to spend the night in either Leavenworth or Wenatchee. Leavenworth is a faux German village. It is fun to visit but can get very crowded in the summer months. I personally prefer Wenatchee and usually stay in one of the chain hotels. The Windmill Restaurant is a Wenatchee icon established in 1931. Famed for its prime rib but I prefer their Rib Eye steak. The restaurant offers seven different types of steak toppers which make this an incredibly special meal.

Pro Tip: Once it gets dark, take a drive down the main drag of Wenatchee to see all the vintage neon signs.

For more Bavarian-inspired towns in the U.S., consider “7 U.S. Bavarian Villages That’ll Make You Feel Like You’re In Germany.”

While Manson is not technically on the loop, it is just up the lake from Chelan that is on the route. Why Manson? It is coming into its own and isn’t as busy as Chelan. The area around Lake Chelan is where Washingtonians take summer vacations. Manson has become a year-round destination due to the more than 18 wineries and tasting rooms in the area. Stay at the Wapato Point Resort and you can walk to the cute downtown area.

Pro Tip: Plan your wine tasting schedule to finish up at Wapato Point Cellars before 5 p.m. After 5 p.m. it turns into a restaurant. Enjoy a tasting while perusing the menu so you can find the perfect pairing for dinner. Each dish on the menu has a recommended pairing or two. The food here is really good and ranks in my top 10 best Washington meals. I love that you will know exactly which wine to order with your meal.

This is the gas stop before you turn onto Highway 153 and begin crossing over the Cascade Mountains again. Visit the small riverfront park to see the outdoor installation by award-winning artist Virgil “Smoker” Marchand, a member of the Lakes Band of the Colville Confederated Tribes. His steel sculptures have become iconic and are located throughout the area. The works are incredibly beautiful with a rusty patina as they age. He depicts images of his people and their culture.

Pro Tip: After you leave Manson, stop at Beebe Springs, which is just past the bridge. There is a cute catch-and-release fishing pond and trails. It is also your first opportunity to see some of the steel Marchand sculptures. Keep an eye out for Marchand’s work as you continue the Cascade Loop.

This is a quirky artist town. On the day I visited, there was an outdoor poetry reading on the corner of one of the streets in this walkable downtown area. Unique things are all about the town, such as a phone booth converted into an honor library. A mannequin dressed in a suit sits atop one of the buildings. There are plenty of interesting shops and places to eat. The Twisp River Recreation Area has many trails for hiking. If you want to hang closer, check out the Discovery Ponds and the Twisp Park Riverwalk. Both have easy trails.

If faux German isn’t your thing, visit the faux Western town of Winthrop. Keep an eye out for Homestream Park, which is right before the bridge heading into town. It is a sharp turn into the park dedicated to the rivers, fish, and Native peoples of the Methow Valley. There are more sculptures by Smoker Marchand. It is a great place for a picnic. Salmon spawn here after traversing from the ocean through hundreds of miles of river and nine dams. It is an epic journey.

The Wild West theme is taken to the extreme in town. It even has wooden boardwalks. The whole place is an Instagramer’s dream with so many photo opportunities. There are pedestrian bridges at either end of town and fun little shops, breweries, and outdoor shops. If you like to hike, stop in the Methow Trails office downtown to pick up the correct passes for the area’s trails. Once the weather warms up, tubing in the Methow River is a blast. Winthrop Tubing offers inexpensive rentals with a shuttle service.

This is some of the most beautiful scenery on this drive which may not be believable after all the stunning sights you’ve already seen. Highway 20 is known as the North Cascades Scenic Highway. It is surrounded on both sides by the North Cascades National Park. You may think you are in Switzerland as you drive through what is known as the “North American Alps.” Craggy mountain peaks and spires dominate the scenery. Make sure to stop at the top of Washington Pass for views of the Liberty Bell and the Early Winters Spires. The most famous views in the park are those of Ross and Diablo Lakes. These glacier-fed lakes stun with their brilliant turquoise-hued water. North Cascades National Park is one of the least visited in the country, and with more than 300 glaciers, it rivals Glacier National Park without the crowds.

As you come down out of the mountains, the terrain will change into rolling hills and then the rich agricultural lands of the Skagit Valley. It is a little bit off the Cascade Loop, but I just love La Conner. It is a fishing village and a vibrant downtown artists colony. It feels like stepping back in town as you explore this quaint hamlet. Museums and waterfront restaurants make this stop worthy. The town is surrounded by acres of farmland, and on clear days you have views of Mount Baker.

The Cascade Loop finished its incredible journey on the Whidbey Scenic Isle Way. This 55-mile byway is known as “The Shortest Distance to Far Away” due to how close it is to Seattle but such a world away. You will cross over the epic Deception Pass Bridge.

Pro Tip: Tons of people park on either side of the bridge and it is a challenging area to park. Instead, enter Deception Pass State Park and head down to the waterfront, where you can park and get a stunning view of the bridge and pass from down below. Whidbey Island is the place to just slow down. I recommend you end your trip by staying a few days on the island to unwind. The pace is slower here.