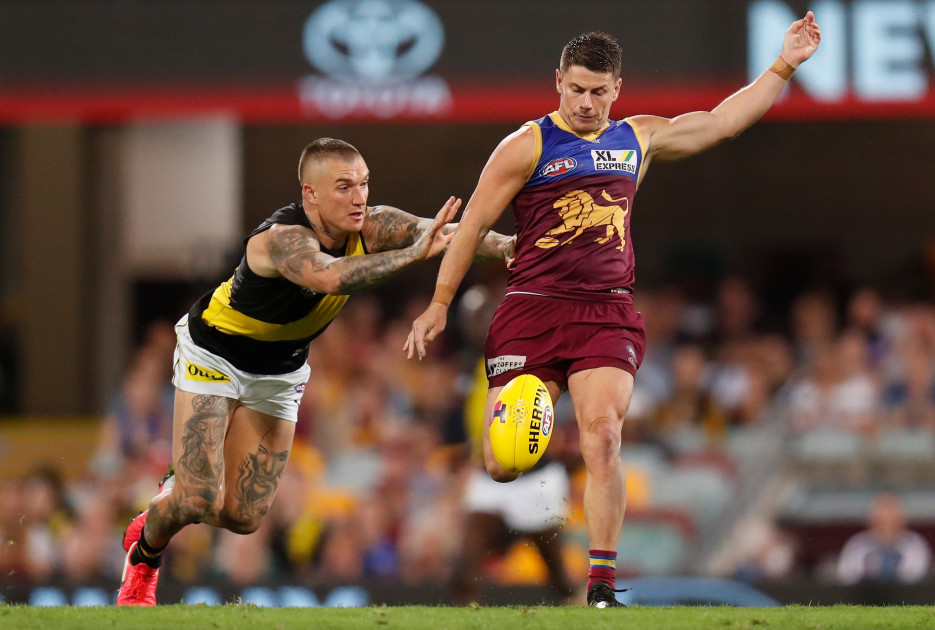 There’s some big games to look forward to this weekend as we near the halfway point of the season.

Round 10 gets underway with Brisbane hosting reigning premiers Richmond in a Friday night blockbuster at the Gabba.

Five matches take place on Saturday with the Western Bulldogs’ clash against St Kilda the pick of the bunch.

Three games on Sunday round out the weekend’s footy.

Who will win and why? Let’s find out below:

Brisbane finally got through the Richmond hurdle last year, beating them in the Qualifying Final.

It was the Lions’ first win over the Tigers in 15 attempts, ending the longest win streak in footy.

They meet again on the Friday night stage in the game of the round.

The Tigers are missing key personnel in all areas of the ground, but proved their mettle coming from behind against GWS last week.

Brisbane meanwhile is firing on all cylinders. They have won five in a row, smashing Gold Coast in the Q-Clash last week.

While the Gabba has been a happy hunting ground for Richmond, the Lions got the better of them in front of an electric crowd last year.

Lachie Neale kicked a big goal, but was quiet given his Brownlow Medal standards and given the Lions will be without him, they should be confident they can get the job done.

Expect a fiery contest given the brawls that broke out last year, but the Lions should have too much firepower given who Richmond is missing.

From a form point of view, this is a doozy.

Carlton hung around but were never in any danger of beating Melbourne last weekend while Hawthorn did the unthinkable by losing to the previously winless North Melbourne.

If looking at the 2021 season so far, the Blues are rightfully favourites for this given their overall form and the fact they’ve been in games against superior opposition.

The Hawks have hit rock bottom following their loss to the Kangaroos and there is nowhere else to go but up.

Just four points plus 17 percent separate the two sides, but Hawthorn has been completely dominant in this fixture, winning 17 of 18 since 2005.

That ever so slightly sways it in the favour of Alastair Clarkson’s men who, if they have any pride at all, will be eager to bounce back strongly from last weekend.

It’s going to be tight but leaning to the Hawks to continue the one-sided trend of this rivalry.

The Cats were far from their best, but managed to overcome an inaccurate St Kilda, kicking four goals to one in the final quarter to run out 21-point winners.

Cam Guthrie (36 disposals and a goal), Mitch Duncan (30) and Zach Tuohy (31 and 593 metres gained) stepped up to help Geelong record their fourth win from their past five games.

Last year’s Grand Finalists are well placed in third spot on the ladder with a 6-3 win-loss record approaching the halfway mark of the season.

Things aren’t as rosy at the Suns.

Back-to-back losses – including a 73-point hiding to Brisbane in last week’s Q-Clash – has Gold Coast staring down the barrel of missing the eight once again.

Suns defender Sam Collins described this week’s trip to Geelong as a “fork in the road” in the club’s stuttering season with the return of vice-captain Touk Miller from suspension a timely boost.

The 14th-placed Suns (3-6) have never won in Geelong, losing all six previous visits to Kardinia Park.

Expect Geelong to win, but can Stuart Dew’s side put up a competitive showing after lowering their colours against the Lions?

Melbourne will be aiming to continue their unbeaten start to the year when they travel to the Adelaide Oval to face the Crows on Saturday.

Both sides are currently on streaks, with the Demons gunning for their 10th straight win while the Crows are on a five-game skid.

Unfortunately for Matthew Nicks’ side, the tough task could prove even harder if the recent record between the two sides at the venue stands for anything.

Adelaide haven’t beaten Melbourne at their home ground since Round 3, 2015, with the Dees winning their last three at the ground against the Crows.

The Crows’ three wins this year have come off the back of manic pressure and key forward Taylor Walker being the beneficiary of direct and fast ball movement.

Luckily for Simon Goodwin, Steven May and Jake Lever should be able to quell the returning Walker’s influence.

Midfielder Clayton Oliver has averaged 34 disposals and a goal against the Crows in his last two outings against them, and he could be set for another big game if he gets off the chain again.

Ultimately, the Demons should have far too much firepower for the developing Crows side.

Two of Marvel Stadium’s tenants clash under the roof on Saturday night in what promises to be a fast and furious contest.

The Dogs are playing some of the best football in the competition right now, taking down Port Adelaide away from home in Round 9.

St Kilda were similarly impressive against Geelong last week, but their inaccuracy in front of goal cost them in a match they should have won.

The Saints have beaten Luke Beveridge’s side in their last three meetings, including in last year’s elimination final.

As is often the case with Western Bulldogs games, it’s all about the midfield and if St Kilda holds any hope of winning, they’ll have to at least break even and not allow the likes of Marcus Bontempelli and Tom Liberatore to take control.

Both sides are well down in ruck personnel, and how well St Kilda readjusts without Rowan Marshall could prove to be the difference.

The Dogs are favourites here, but never discount the Saints at Marvel Stadium.

Fremantle will be wondering what might have been after blowing a golden opportunity against Essendon, dominating for large parts of the match but failing to make it count on the scoreboard.

After several weeks on the road as a result of Perth’s COVID scare, they return to home comforts to face a Swans side who did what they had to do against Collingwood at the SCG last Saturday.

There’s a big opportunity for both sides here – for the Dockers it’s all about staying in touch with the eight. For the Swans, they’ve quickly cemented themselves as a bonafide finals contender and a win on the road would only strengthen those credentials.

These two sides played at the same venue last year, in what was a low-scoring slog where just nine goals were scored between both sides. You’d hope that at the very least, Saturday night’s game will be a better spectacle.

The Dockers’ depleted defence will have to be on guard against Lance Franklin, while Matt Taberner will have to shoulder plenty of the load up forward if Justin Longmuir’s side is to win.

The Swans are favourites for the game, even if it is in Perth, but you can not discount the well-organised Dockers to pull off the win at home.

Stay up to date with all the latest news from SEN. Sign up HERE.

The Giants host the Eagles in a fascinating Sunday encounter.

The home side is coming off a heart-breaking loss at the hands of Richmond where they led by as much as 28 points in the third quarter but could not quite see it out.

West Coast had no such issues with Adelaide, turning on a seven-goal second quarter to win by 30 points at home.

The Eagles travel to western Sydney in pursuit of a fourth straight win and with the chance to enhance their standing in the top eight.

This fixture has been one of happiness for Adam Simpson’s men, winning their last four over the Giants, including a 12-point triumph in Perth in Round 13 last year.

Leon Cameron’s GWS outfit have been in solid form in recent weeks and will be eager to step out positively against a quality opponent, but are they carrying too many injuries?

Their undermanned defence will be tested against the likes of Jack Darling, Josh Kennedy and Oscar Allen and they will need to find a new spark with stand-in skipper and leading goalkicker Toby Greene sidelined with a shoulder injury.

That presents as a major issue for the Giants who have been hit hard by injury and will need something fairly special in order to get the better of the Eagles.

West Coast haven’t been great on the road in 2021 but should make it two in a row away from home by seeing off the below-strength Giants.

These two teams have been jostling all season and now they’ll finally get to clash on the field.

Collingwood put their foot down and did not allow Port Adelaide to wear their prison bar jumper in the Showdown in Round 8.

The Power begrudgedly accepted the situation before donning the guernsey in the rooms to sing the song after the game.

Now they travel to take on the Magpies at the MCG, with the two teams to settle things the old fashioned way.

Port is coming off a home loss to the Bulldogs, while Collingwood struggled to score after quarter-time against Sydney.

The teams have split the last four results 2-2 though the Power got the better of the Magpies in 2020.

Only three sides have scored fewer points this season than Collingwood, with the Pies struggling to work out their avenues to goal outside of Jordan De Goey.

If they are to beat Port Adelaide, they will have to kick a winning score against a Power defence that is conceding an average of just 72 points.

Travis Boak and Ollie Wines have carried a huge load for Port in the midfield, but their depth beyond them has been called into question. If Collingwood, via Brodie Grundy, can get on top in the middle it will go a long way.

The Magpies, if anything, are a defensively sound team and Port Adelaide will not have it easy in a game that will likely be emotionally charged.

They should still be too strong, however.

Essendon and North Melbourne have played some iconic matches with the rivalry peaking in the late 1990s and early 2000s when both clubs were contending for premierships.

The Bombers and Kangaroos are looking to return to past glories, but fans will require patience as they go about their respective rebuilds.

Ben Rutten’s young side looks to be on the right track and will benefit from getting over the line after dropping close games against Hawthorn, Sydney and GWS earlier this season.

After losing their opening eight games, North Melbourne broke through for their first win of 2021, coming from 32 points down to beat Hawthorn by seven points.

It’s a welcome relief for first-year coach David Noble who has placed an emphasis on process in what has been a testing period for the club.

Jy Simpkin (38 disposals) and Ben Cunnington (37 with 27 contested and 13 clearances) willed the Kangaroos over line while Cam Zurhaar found form with four goals.

Essendon have won their past five meetings against North with both clubs searching for back-to-back wins for the first time this season.

Who will get the bragging rights on this occasion?