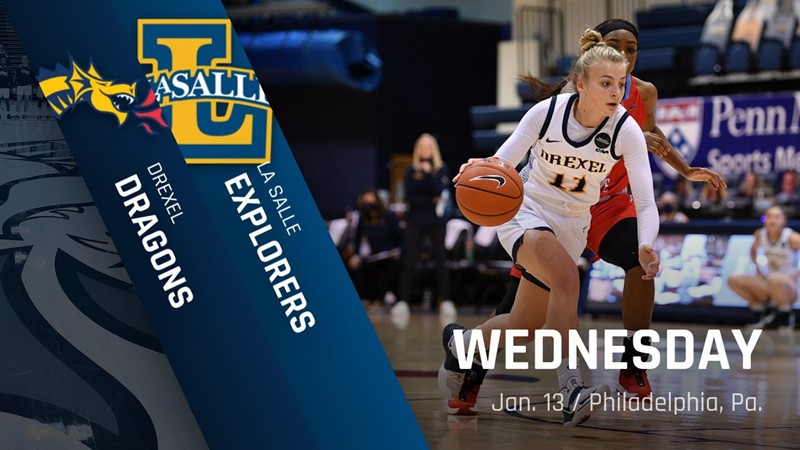 
PHILADELPHIA – The Drexel University women’s basketball team (5-1) will travel to North Philadelphia to challenge the La Salle Explorers (4-6) on Wednesday, Jan. 13. Tip-off is at 6 p.m.

Drexel play-by-play announcer Ari Bluestein will have a free, live radio call. The game will also be streamed on ESPN+.

HISTORY
The Explorers and Dragons were scheduled to meet earlier in the season, but the contest was postponed to its new Jan. 13 date. Drexel is 10-16 against the Explorers though the Dragons own a six-game winning streak over La Salle. The most recent matchup was a 69-31 victory for DU on Dec. 17, 2019. This contest will be the 27th game between the two teams since 1982 when Drexel moved to DI.

LAST TIME OUT
The Dragons hosted Delaware State at the Daskalakis Athletic Center on Saturday in DU’s home opener, defeating the Hornets, 70-47. Senior Mariah Leonard matched her career high with 15 points on the day as she led the Dragons in the win. Junior Maura Hendrixson, for the third-straight game, finished in double figures with 11 points. The Dragons outscored the Hornets in the paint, 42-20, and on fastbreak points, 17-2.

TEAM LEADERS
Nihill leads the Dragons, averaging 15.0 points per game followed by Washington (12.4) and Connolly (8.7) through six contests. Hendrixson leads the conference and ranks fifth in the country with a 4.8 assist to turnover ratio.

LAST SEASON
Drexel claimed a share of the CAA regular-season crown and the No. 1 seed in the CAA Tournament with a 16-2 record a year ago and reached the 20-win plateau (23-7) for the fifth time in the past six seasons.